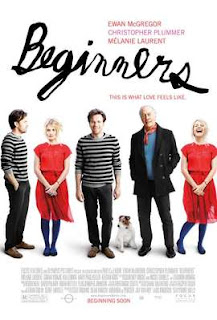 What would you do if your 75 year old father, just one week after the death of his wife, and your mother, announced to you, and the world that he was gay, always had been, and wanted to explore as fully and richly as he could before he too slipped off this mortal coil?
If you’re Mike Mills, who lived through exactly this scenario, you write a powerful yet quirky script, get Ewan McGregor to play a fictionalised version of you called Oliver Fields, entrust the talented Christopher Plummer (Hal Fields) with the role of your father, throw in an unconventional love affair between the movie version of you and a left of centre Frenchwoman, Anna (played by the lovely Melanie Laurent), and set everyone off on a voyage of discovery the likes of which you never foresaw being taken when life was ordered, and unsurprising. What the movie explores, in a less than conventional but ultimately rewarding narrative, that picks up after his father’s death from cancer five years after his coming out, is what happens when the life you thought you were leading is not at all the life you actually had.
In short order, Oliver’s safe but dissatisfying existence, is shaken up by his father’s coming out, his new life as a gay man (which includes a passionate open relationship with the somewhat juvenile and emotionally stunted Andy, played by Goran Visnjic) which actually draws father and son closer together in ways Oliver never would have imagined growing up as the parents of two people who knew the marriage was a well-meaning sham but played along anyway, and the events following his father’s death when Oliver realises that he must let go of what he knew and plunge into the terrifying, but far more satisfying unknown.
It moves back and forth between the past and the present, uses conversations Oliver has with his father’s terrier Arthur who comes to live with Oliver post his father’s death and can’t bear being left alone, and flashbacks to Oliver’s childhood with his utterly unconventional mother, and his distant father. Through it all, we see Oliver gradually come to terms with the effects his growing up had on him, and the realisation that if he is to ever have a life of any note, that it must be lived with the same joie de vivre and passion that his father displayed in his new life as a gay man.
Though it is not the conventional movie the trailer would have you believe, it is one of those wonderful movies that moves effortlessly between quirky, funny and moving, with characters you grow to care deeply about it, who reinforce the notion, without hammering you over the head with it, that life must be lived with authenticity, richness and passion if it is to have any real worth at all.