Even if you get along brilliantly well with your father, and I am thankful that I did while my dad was alive, the idea of travelling with them anywhere, let alone on a kid of replacement gap year, is fairly intimidating.

After all, it’s one thing to share a joke over breakfast or sit watching a favourite TV program with them; quite another to journey through Thailand, Cambodia and Vietnam as 28-year-old British comedian Jack Whitehall recently did with his hilariously irascible, foreign-anything averse 77-year-old dad Michael.

For one thing, the two men, as you might expect from a hip, socially-observant left-leaning young man and a Tory-voting ex-showbiz agent and producer who counts Nigel Havers as a friend, seem to agree on very little.

Granted this yawning gulf has been played up for television to some degree, but you get the impression fairly quickly that father and son, while obviously close, do not wholly agree on many things at all.

For a start, on what constitutes acceptable holiday accommodation.

Having not experienced the usual kind of gap year that most people his age did by virtue of starting in stand-up comedy at the tender age of 17, Jack is determined, when a rare moment of free time presents itself, to seize the moment and finally get his gap year.

Admittedly, it’s crammed into five weeks but the intent is to stay in backpacker lodgings, go to full moon parties on Phuket, eat street food and generally behave like any teenager would, fresh from high school and ready for whatever fun comes their way before adulthood hits with a vengeance.

It’s a lovely idea and you can understand why Jack would want to experience it but would you want to take your dad, especially one who had you relatively late in life – there’s a 26 year age gap between Michael and his wife Hilary – and sent you off to boarding school at age 8? 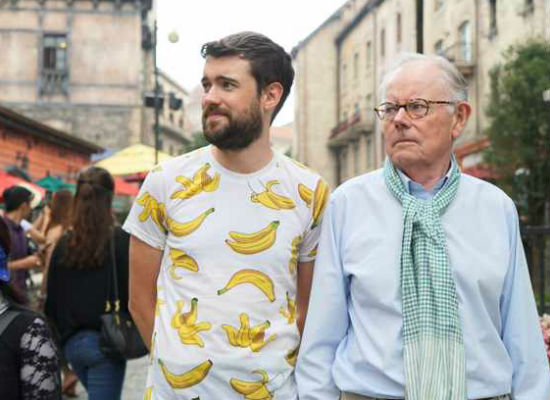 Perhaps not, but Jack is game, happily taking his dad, a man used to fine dining, exclusive shops and five-star hotels, along for his fun-filled, reliving his barely-departed youth with a man who is clearly not as ready to relive anything that affects his comfort and ease.

The interplay between father and son is hilarious from the get-go, a gentle bickering that clearly comes from a genuine place of affection but is no less barb-filled for that.

It’s clear that close or not that there are few points of commonality when it comes to what Jack and his dad expect from travelling.

For a start Jack’s happy to try the whole bunk bed, backpacker thing, marching into the room they’ll share with six others, only to find his dad walking in completely the opposite direction saying “No, no NO!” on his way to checking them into a swish, damn near palatial hotel nearby with a rooftop restaurant that is most certainly not a hawker stand, a place he eventually convinces Michael to eat at (not that a morsel of food is consumed at all by his dad).

Again, there’s doubtless been a lot of thought put into how to play up these differences, but calculated or not, the result is a deliciously, laugh-out-loud funny series of exchanges that reveal a great deal of the cavernous differences that can exist between father and son.

But what also becomes obvious fairly quickly is that the two actually do like each other.

Not in a “we’re in the same family, we’d better make the best of it” kind of way but in a genuinely affectionate way that suggests for all their differences, a rapport than can’t be faked.

Played up or exaggerated maybe, but not faked and so part of the delight of Travels With My Father is knowing that for all the slings, jibes and digs that the bond between father and son is strong and unyielding and importantly for two people who are in close proximity for five weeks, coming from a place of actual mutual enjoyment of each other’s company.

That being said, it’s also blindingly obvious that there are fissures there too that go beyond how to travel between various locations or what kinds of facts and figures you need to know to fully appreciate a visit to the infamous Bridge on the River Kwai.

How deep-seated these issues are becomes clear when Jack and Michael are in Ko Panyi in southern Thailand where centuries ago Malay fishermen built villages out over the water to get around a prohibition forbidding foreigners from owning land in the country.

Far more recently, the Muslim villagers who live here formed a highly-successful football (soccer) team, their pitch a sophisticated floating platform on which the football-mad Jack plays a game.

He plays so well in fact that his team wins, something that his dad, who is famously critical of his team, actually congratulates him on; what makes this emblematic of the relationship between the two is Michael’s rare support and public articulation of that support contrasts with an earlier elephant-based polo match in Bangkok where Jack, who to be fair had never played the game before, failed dismally at.

These two events are separated by an episode or so but they illustrate that for all their closeness and openness – the verbal sparring is evidence of this if nothing else – that there are still the kinds of friction that beset even the most loving parents and children.

It’s the pair’s willingness to be that honest that makes Travels With My Father such a rewarding show to watch.

It’s funny, very, very funny with some hilarious oneliners shared between the two men, and the scenery and tourist experiences are up there with the sorts of travelogues that Joanna Lumley and Simon Reeves do so well.

But it’s also winningly real and occasionally heartfelt, happy to admit that even if you really love someone, and enjoy with them, that you won’t necessarily ever completely see eye-to-eye.

And that’s OK, and quite survivable because if you can come to the end of close quarters touristing and still be speaking to the person in question, then maybe good old fashioned, day-to-day family life back home doesn’t have to be so bad after all.

All six episodes of Travels With My Father are currently available on Netflix.