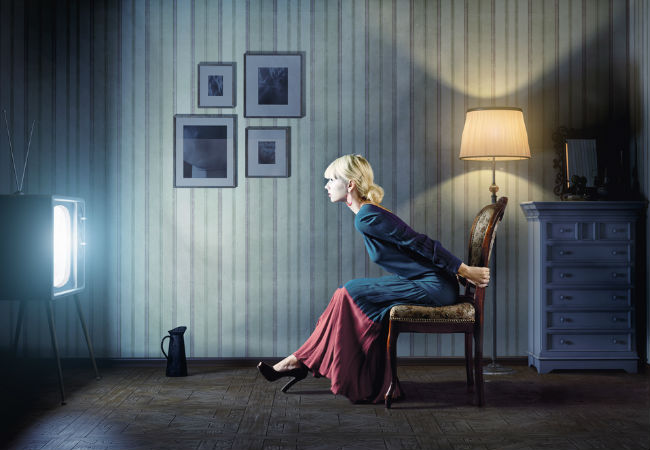 Let’s hear it for the new neverending Golden Age of Television!

While it does make keeping up with everything a challenge of neat Herculean proportions, it’s not a bad #firstworldproblem to have since it has effectively ended the reign of reality TV – yes, it’s still there but no longer as dominating as it once was thank goodness – and given us bounteous televisual riches to fill our days and nights.

The thing is there is now no reason to utter the words “There’s nothing to watch on TV!”; if you say that well-worn, hackneyed phrase in this day and age then you are clearly not trying at all.

For the rest of us, there’s a whole lot TV always in the offing including the return of these five amazing shows …

After an interminable wait, series 2 of Outlander, the adaptation of Diana Gabaldon’s series about a time-travelling woman with a foot in two quite different centuries, is close to hitting our screens.

And with Jamie (Sam Heughan) and a very pregnant Claire (Caitriona Balfe) safe and sound in France, and using Claire’s knowledge of the future to avert the disastrous Battle of Culloden, there’s much drama in the offing.

It’s not just the outward drama that will be in play; as this trailer makes plain, Claire’s knowledge is a heavy burden to bear since it means she can never be an innocent bystander, never be able to immerse herself in events without knowing exactly where they will lead.

And that she will never be free of being a woman divided between two time periods, two men and a whole host of possibilities and options.

An invidious position indeed, one that Outlander looks set to explore in all its glory, love, angst and drama.

SNAPSHOT
[Developed] with The Increasingly Poor Decisions of Todd Margaret writer Mark Chappell, Flaked centers on Chip (Arnett), a Venice, California, transplant. He’s a staple in the community, shown speaking about his past addiction in a public setting. Friendships turn complicated when he pursues a new resident (Ruth Kearney), who’s also fancied by his best friend (David Sullivan). Chip’s foundation only becomes weaker from there. (synopsis via & (c) EW)

How many of us get the chance to reinvent ourselves? I mean, really fundamentally kick away the mistakes of the past, the failings and the poor choices and start all over again.

Not many of us, and even of those people so favoured to be given a second chance, the road to renewal and change is not an easy one, strewn with all kinds of obstacles and possible self-sabotaging opportunities.

If you think that’s a great receipt for a show then you’d be right and as star Will Arnett told EW, there’s much to explore in a character he plays:

“There’s this idea of the persona that we put out to the world, and the person that we look at it in the mirror at the end of each day. If the divide between those is great, then you’re in really big trouble. Chip’s a good guy. He’s not ultimately being totally honest with himself about where he is and who he is, and that’s his struggle.”

Flaked puts Arnett’s fallen, fallible guru in Venice Beach, a place ripe for lampooning but also one that genuinely carries the promise of successful reinvention:

“As for the location, Venice is its own living creature, rife with workout junkies and hipsters alike. Arnett has lived there intermittently through the years and calls it his favorite part of L.A., and one of his favorite places anywhere. ‘I love the idea that there’s a certain allowance for reinvention,” he says. ‘I feel like people go to Venice to reinvent themselves often. What’s so great about that is it allows for that, and you’re not sort of cast away for doing that.

‘While there are parts of that that are really funny to lampoon, it’s something kind of great.'” (source: EW)

It sounds like an intriguing, highly-relatable premise and it will be interesting to see just how Chip copes with the 1 step forward, 12 steps back (best tagline ever!) of his hopeful new life.

The entire first season of Flaked debuts on Netflix on 11 March.

The first gripping season of AMC’s second zombie-infested show, which takes places in the lead-up to, and the early terrifying days of the zombie apocalypse that is well-advanced by the time Rick Grimes wakes up in The Walking Dead‘s first episode, ended with our intrepid band of survivors boarding a yacht, the Abigail owned by enigmatic rich guy Victor Strand (Colman Domingo).

That ways lies safety you might think with all the undead chaos back on land but as this all too brief teaser trailer illustrates, many other people have had the same idea, and with the dog-eat-dog new world well and truly underway, being afloat may be just as deadly and problematic as standing high and dry on terra firma.

The dilemmas, as showrunner David Erickson makes clear to EW, will be there in abundance:

“You’re going to see a bunch of seabound refugees over the course of season. And much in the same way that we have taken steps to survive and compromised our morals to do so, we’re going to have to deal with some people who have very similar objectives, and the default setting for most of these people is not going to be, let’s all live in harmony and try to build a new community. It’s going to be, how do we protect what’s ours? How do we protect our family? So there’s going to be a very serious threat from other people, as there is constantly on The Walking Dead.”

Much like its parent show, the survivors of Fear the Walking Dead are going to discover that simultaneously hanging on to your humanity while you hang onto your life is no easy undertaking in the apocalypse.

Fear the Walking Dead returns on 10 April with a two parter premiere on AMC; the first seven episodes screen in the first half of the year with the back eight screening later in on 2016.

It’s a tie! An electoral college tie and even though Selina Meyer (Julia Louis-Dreyfus) says she’s “in awe” of democracy to the public, in private she’s lamenting the toll its taken on her (narcissistic as always), lamenting to longtime, much out upon dogsbody aide Gary (Tony Hale) that her “eyelids are starting to look like Keith Richards’ ballsack.”

To which, permanently stuck in sweetly-innocent brown-nosing mode he replies, “He wishes.”

Yup, Veep is back, as unedited, twisted, dark and cynical as always, to which we say “Hurrah!” Pass me some political reality and don’t coat it in spin or slogans thank you very much.

As we’ve witnessed over the last five very bloody seasons, it’s not so much a game but a bloody vicious fight to the death.

But in political and realpolitik terms it is a game of sorts but not the sort you ever want to lose at – right Jon Snow? Who may or may be dead … maybe … maybe not.

As Forbes points out, however, dead in the world of Game of Thrones is not always dead …

“After being knifed a dozen odd times by members of the Night’s Watch, and bleeding out on the snow looking very, very dead in the season five finale, logic would say yes. However, given that this is an epic fantasy, sometimes you’re allowed to throw logic out the window.”

But then so often dead is dead as the teaser trailer’s slow mournful, haunting pass through the Faceless Men’s Hall of Faces makes all too clear as a roll call of the departed including Ned Stark, Robb Stark, Catelyn Stark and vile Joffrey are given one last word from beyond the grave.

Intriguingly though, the faces of very much alive characters like Tyrion and Daenerys Targaryen are also shown sending a very clear message that you trust in your mortality at your own peril.

Nothing can be assumed and it’s safe to say nothing is or will be as Game of Thrones kicks off season 6 on 24 April, 2016.

Even though they seem to keep taking one step forward, 800 back in the dog-eat-dog world of Silicon Valley, still they persist, their little-train-that-could enthusiasm an inspiration for all of us.

And grist for the mill of some very funny, very awkward comedy about a bunch of wannabes trying hard to take it to the big boys and girls in town and often coming out second best.

But not always … and that’s why we keep watching.

Season 3 sees Richard (Thomas Middleditch) attempting to exert a confidence he doesn’t quite possess in an attempt to wrest back control of the company he started and whose success pivots solely on the program he created.

Unfortunately, despite a suit and some hardcore gesturing, he falls flat on his face. I mean, literally ON HIS FACE. Ouch!

Will he make it back up? We’ll all find out when Silicon Valley season 3 premieres 24 April.