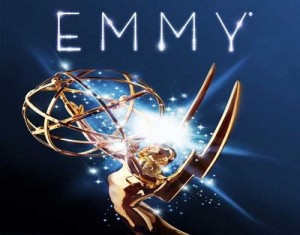 Well the 64th Primetime Emmy Awards, held Sunday US time at the Nokia Theater in Los Angeles have been and gone and left a lot of people, including me, scratching their heads.

It’s not an unusual reaction to the Emmys, indeed any awards show, who sometimes award the right people with such unerring accuracy you marvel at the hand of the media divine in their decision making; while at other times, they are so far off that you would swear a team of brain damaged marmosets in straitjackets randomly plucked names out of a telephone book in a sandstorm.

This year’s Emmys sat somewhere in between, more the result I suspect of an ambivalent dope smoking hippy switching his attention between re-runs of Real Housewives of Plano, Texas and the Blurays containing the actual shows he should be paying full attention to and voting on.

That is to say that the Emmys didn’t so much get it horribly wrong, or blindingly right; they sat somewhere uncomfortably in-between, but unlike Goldilocks and her luck in finding the third “just right” bed, it didn’t feel like much of anything in the end.

And that’s not necessarily because some talented people didn’t win.

Unless you had your pulse removed one night by aliens looking for an adrenal high – don’t laugh it could happen and might make a damn good TV show – you couldn’t help but find Homeland, the story of a US soldier returned home after years held captive by Islamic terrorists who may or may not have been compromised during his incarceration, one of the most gripping, politically and emotionally shows of the 2o11/12 US TV season.

Deserving wins all, although I am sure the good folk of Mad Men, who were up for 17 awards and went home completely empty handed didn’t think so, and no doubt spent the after parties muttering darkly into their 60s-era martinis. Homeland‘s success meant Mad Men failed to get a record fifth consecutive Emmy for drama series, which according to Glenn Whipp of latimes.com, had everything to do with “’voter fatigue’ to a need to send a message to Mad Men creator Matthew Weiner, i.e.: ‘Get over yourself.’”

Whatever the reason for the snubbing of Mad Men, and the equally impressive Breaking Bad, which it has been suggested is a bit too dark for the tender sensibilities of some of the older Emmys voters, no one can deny that Homeland didn’t deserve to carry home a big rig’s worth of shiny’s golden statuettes.

OK they could but really who would have listened? They were all off at the after parties by that point, pretending to be fascinated some starlet or another and hoping the goodies bags contained something they could hock on Ebay if the next round of contract negotiations didn’t quite go to plan.

Truth is, Homeland is a brilliantly realised show and deserved the considerable amount of kudos shovelled on to it at the awards (I suspect they are still trying to dig themselves out 24 hours later).

What I felt didn’t deserve quite the amount of suffocating stalker-obsessed love it was shown, though it is a fine show in its own right and one of the finest family sitcoms to have graced our screens is Modern Family.

I have loved this show from the word go and Steve Levitan and the team deserve all the credit for managing to take the family sitcom off the drip sustaining it as it lay comatose in the hospital of dead-and-dying genres and injecting it with  some much needed sass and verve before all of us expired from terminal boredom.

But having watched every episode of Big Bang Theory, Veep and 30 Rock that I can get my needy sitcom-craving hands on – I am still jonesing for episodes of Girls, which has quite managed to make its way across the Pacific legally yet – and loving them all with the passion of a Bieber Fever sufferer discovering Twilight for the first time, I am not convinced that Modern Family‘s win for Outstanding Comedy Series is entirely well deserved.

Frankly I still maintain Parks and Recreation should have been front and centre and should have simply been handed the awards for every single category – yes even drama series, sorry Homeland – until Amy Poehler and gang collapsed under the weight of all those pointy glittering trophies.

But it didn’t even get nominated and so I, along with millions of other sitcom tragics, fully expected the consistently inspired 30 Rock, or hilarious newcomer Veep to march off with the gong. Of course Modern Family is funny, clever and a breath of fresh air, and it is one of the shows I regularly make time for, but I don’t think it has the sort of one-of-a-kind comic smarts that fuel its nomination siblings.

Even then though I am torn. Mostly because the comically gifted Max Greenfield (New Girl) who plays the narcissist with a heart of gold, Schmidt, would have made a more than worthy contender for the gong. He has taken a role that could have so easily been mired in the quicksand of cliche (with a side of rote, predictable dialogue to go), and given it a vibrant three-dimensional quality that has made him, with all due respect to the talented and adorkable Zooey Deschanel, arguably the breakout member of an especially gifted ensemble comedy.

Still, the biggest surprise of the night, apart from the fact that the much-deserving Maggie Smith, who gloriously dominates Downton Abbey, grabbed the Supporting Actress in a Drama award out from under Christina Hendricks (Mad Men) and the uber-talented Julia Louis-Dreyfus won  Lead Actress in a Comedy Series for Veep, was Jon Cryer winning  Lead Actor in a Comedy Series for Two and a Half Men.

No one, of course, after a theatre full of jaws had been graciously Botoxed back into place from their resting place on the floor, was more caught by surprise than Jon Cryer who was genuinely perplexed by his win:

“I’m as shocked as you people, that’s all I’m going to say. That’s why my speech sucked! … Mostly I was just in enormous shock.”

After seven nominations, and one win, in the Supporting Actor category, it’s no surprise that he didn’t expect much when he was elevated to the ranks of Lead Actor for the first time. After all Charlie Sheen had always been the one who dominated Emmys noms for the show, and Jon Cryer only really got a look in when Sheen rather unceremoniously left the show.

Now, while there’s no doubt that Jon Cryer is a thoroughly nice guy who has great comic timing and has his talents far more obviously on show now that Sheen has fled the roost, but he is in a show of rather dubious worth that wallows in the sort of cliches other shows run from like it’s the plague (yes that cliche was intentional, thank you). Frankly I would have handed the award to Jim Parsons (Big Bang Theory) or Alec Baldwin (30 Rock) well ahead in a heartbeat of Jon Cryer because they’re superbly talented actors in distinctive, highly original literate sitcoms.

But still upset or not, you can’t ultimately begrudge Cryer the win if only because he deserves some sort of reward for labouring in a subpar show with something like Sheen as a co-star.

So in a year where neither the brain damaged marmosets nor the hands of the gods guided the voting, and the ambivalent voting hippie reigned supreme in a cloud of gunja, we can at least take comfort in the fact that awards were still to be had for Aaron Paul (Supporting Actor in a Drama Series, Breaking Bad) and Louis CK (Writing in a Comedy Series, Louie, and Writing in a Variety, Music or Comedy Series, Louis C.K. Live at the Beacon Theatre), and hope that next year, in farway 2013, Amy Poehler will be given the chance to strut her stuff and deliver her own awesome speech as the Emmy voters while other innovative clever shows are given plaudits without number.

And oh yeah, here’s hoping we can dodge the remorseless cloud of flying pigs as they whoosh ever so closely to our heads on their way to present the awards.

* Here’s a very entertaining look at what might be store at next year’s Emmys. Yes. Next Year’s. I kid you not.

Oh and my favourite shot of the night? The adorable Zooey Deschanel (New Girl) and Jim Parsons (Big Bang Theory) present an award and have a bundle of fun doing it.