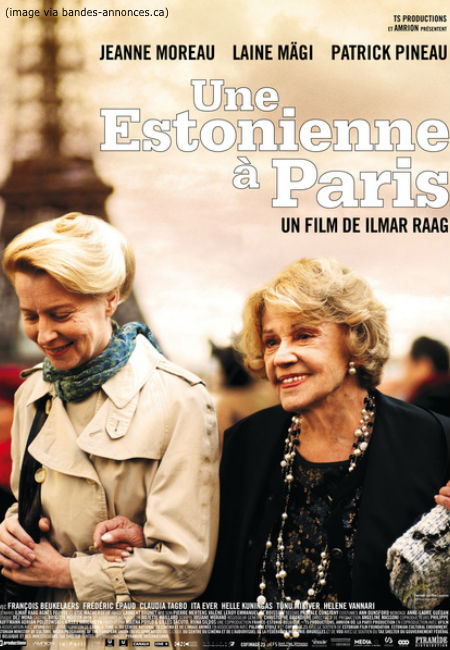 When we first set out on this adventure called life, very few of us expect to near its middle or god forbid, its end, marooned in time, far from the idealistic expectations of youth.

Certainly neither Anne (Laine Mägi) nor Frida (Jeanne Moreau), two very different women separated by a continent and a world of different life experiences, who eventually find some measure of companionship and respite from time’s cruel hand with each other in Ilmar Raag’s Une Estonienne à Paris (A Lady in Paris; literally An Estonian Woman in Paris), would have seen themselves ending up in such a place.

And yet when this charming, beautifully crafted comedy-drama opens, a film that pays as much homage to beauty of Paris as it does to the possibility of new beginnings, both are alone, unfulfilled and pining for a life that never quite arrived.

We first encounter Anne in the depths of an Estonian winter, trudging home one night to her elderly mother (who is suffering from dementia and doesn’t even recognise Anne as her daughter) worn down by life and effectively abandoned by her career-minded son and daughter, and her sister and oafish brother-in-law (who makes a drunken pass at her on the same night, much to her disgust).

Forced to give up work to look after her ailing mother, her world has shrunk down to bus rides and her small apartment, and threatens to shrink still further when her mother dies leaving her alone with little to do.

When she is offered a job in Paris caring for a wealthy elderly Estonian emigre, Anne, who is reasonably fluent in French, hesitates only slightly – long enough for her daughter to convince her it’s “cool” and she must take up the offer – before deciding to take the chance to visit a city and live the kind of life she has long dreamed of, a dream curtailed abruptly by a youthful marriage that ended 12 years earlier in divorce.

In a touching scene prior to her departure she plays a song by Joe Dassin, and lost in the memories, and new possibilities, it engenders in her, Anne, a woman not prone to grand emotional gestures of any kind, gently smiles, hope writ large across her well-worn but still pretty face, a smile that finds expression again when she glimpses the Arc de Triomphe and the Eiffel Tour for the first time.

Frida, the woman she has been charged to attend to, is similarly lost in time and alone but for wholly different reasons.

Emigrating to Paris many years before, she effectively disavowed her heritage, falling out of contact with her family, and fellow expats in Paris (an affair with one of the married men in the Estonian choir in which she sang is still a source of palpable friction), her only goal being to become a famous dancer.

While that ambition was never realised, she married well to a man she adored, and found love after his death in the arms of a much younger man, Stéphane (Patrick Pinneau), the only two men she admits later to Anne that she ever truly loved, among a string of brief but never cared for lovers.

Stéphane has remained in her life (he is the one who employs Anne), and clearly retains great affection for her even as he feels trapped by his attachment to her, an unbreakable tether given physical form in the cafe he owns and runs, a gift from Frida many years before.

But for all the love she has enjoyed, and wealth she has accumulated, Frida, like Anne finds her life has shrunk down to just tea and bakery-bought croissants – her response to Anne supplying supermarket-acquired croissants for breakfast is priceless) – and occasional visits from Stéphane, in an apartment that is like a beautifully-apppointed museum, a frozen-in-time testament to a once-rich life that is no more.

Their eventual meeting, which is as fiery as you would expect the coming together of a woman exhausted by life but hopeful it can change (Anne) and a feisty woman who believes the best is behind me and there is no point sticking around to find out if she’s wrong (Frida, who is given some of the best lines in the movie, all of which are delivered with Moreau’s trademark wit and flair) is the beginning of a journey that will disabuse them both of the assumptions about the future that they have carried for so long.

While the resulting drama is more whimper than bang with no startling dramatic ground covered – Frida resents Anne, Anne retreats, begins to come alive, fights back, attempts to leave, they bond forever – it is done in such an emotionally-rich, understated way that you can help but be invested in their move from antagonists to sympatico souls which is real and believable and ultimately, quite touching.

Both Moreau and Mägi are pitch perfect in their representations of disillusioned women coming back to life in quite different ways and in real need of the presence of the other.

Mägi’s quiet but profound appreciation that her dream has finally come true, which is evinced most deeply on two visits to the Eiffel Tower, one at a dawn when she believes her time in Paris has run its course, is raw and yet elegantly portrayed, and reflects the gentle dignity she brings to the role.

Moreau on the other hand is combative and feisty, determined to rally against the dying of the night, save for when she temporarily gives up and retires wounded to her bed (largely the result of a much-regreted retreat by Stéphane from her life, one he repairs with an exquisitely sweet scene near the end of the movie) but nevertheless brings Frida to life as a fully-realised three-dimensional woman whose plaintive cries for Anne, after Anne leaves, are heartbreaking.

There is a richness and truth to both these roles, which withstands minor quibbles with the narrative such as the barely-realised comes-out-of-nowhere attraction that Stéphane feels for Anne, and the comparative ease with which both women grow to like each other (it’s almost too quick at times), and it is that which primarily sets apart “Une Estonienne à Paris” (“A Lady in Paris”) as one of those movies you will want to come back to again and again.

If it is only to be reminded that second chances are possible, no matter where you find yourself in life.