Today (UK time), 19 July Rupert Murdoch & James faced a British parliamentary enquiry established to looking into the News of the World scandal, which grows wider and more damaging by the way, and while very little of anything was admitted to by them (like that was a surprise), comments in the Twittersphere were damn near hilarious….

“Rupert didn’t know anything about anything. “Nobody told me.” “It was like that when I got here.” “A Big boy did it and ran away”… (@PaulBurston)


“I give it five, maybe six minutes before Rupert denies ever having owned a newspaper.” (@benpobjie)


“Remember Dad one kick in the shins means yes, two means no.” (@craigreucassel)


“I do not have knowledge of that.” Having tshirts printed (@StMurphy)


“James is so grounded when they get home.” (@s_sidekick)


“Look away from the screen and imagine Tom Cruise delivering Jame’s dialogue. It works.” (@johnbonbailey)


“Geeks, having trouble concentrating on the enquiry? Imagine it’s the Emperor and Darth Vader in front of the Jedi Council.” (@Simon Pegg) 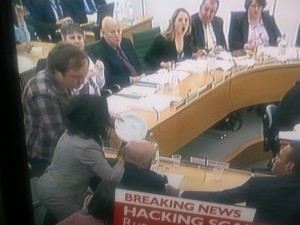 ... and it all ends with Murdoch getting hit with a pie by a Johnny Marbles at the enquiry. Farce plus!