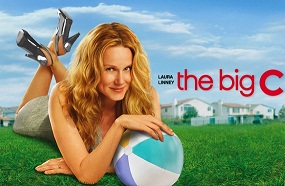 The Big C is one of the standouts in that relatively new crop of HBO-quality shows – even when the shows aren’t from that stable of quality, they are invariably tagged as such – which also includes Hung, Breaking Bad,  United States of Tara, and the much longer running Weeds, which feature a protagonist from the squeaky clean side of the street who is forced by dire circumstance of one kind or another, into making compromises and decisions that lead far across the lines onto the wrong side of the tracks, or at least into almost unrecognisable territory where few in society wish to tread. While they are shocked at first at the things they say and do in the interests of survival, they reach an accommodation of sorts with their new life because they usually have no choice but to do so. They could rail and rant, and scream about their misfortune, but in a society like America, with it’s less than generous welfare net, and resulting dog-eat-dog survival mentality, especially for the lower socio-economic classes, this achieves nothing, and the first of order of the day, of each and every day, is simply to do what it takes to survive.
In the case of the Big C, which stars the supremely talented Laura Linney as Cathy Jamison, a middle class teacher with stage 4 cancer, this means doing whatever it takes to ensure she survives her battle with melanoma in the midst of a broken medical system that too often penalises the very people it is supposed to be helping. She does have allies in her fight – among them, her loving husband Paul (played by the awesomely good, Oliver Platt, who has yet, I suspect, to ever find a role that doesn’t agree with him), and her son, Adam (Gabriel Basso), who plays a teenager torn by wanting to spend time with his mum, but simultaneously wanting to fleeing the reality of her possible death, and a high school student in her class, Andrea (Gabourey Sidibe of Precious) who is perhaps the only person she knows, besides her husband, who doesn’t try to sugar coat the harsh reality of Cathy’s present situation.
But despite all this, Cathy battles on, doing what she must to get appointments with specialists – leading to an hilarious scene where she sneaks into an elite oncologist’s surgery as a saleswoman from a drug company and makes a scene demanding an appointment just as the receptionist is calling her to confirm one – battling everyone’s well intentioned but suffocating sympathy, and trying to hold on to a semblance of a normal life while it breaks apart with gusto around her.
What is wonderfully refreshing is that she manages to create a new life, full of contradictions, and breaks with her well ordered previous middle class existence, and make it work with a mix of saintliness, screaming frustration, and a heapin’ helpin’ dose of black humour laden one-liners. Her life may have changed beyond all recognition but it is her life, and she will fight to retain it with everything she has in her arsenal, regardless of where it takes her, and for the audience at least, discomforting though it may be at times, where her unexpected journey takes us is entertaining indeed.