For a series set in the zombie apocalypse, where survival must be fought for inch by inch, second by second, and there isn’t a whole lot of time for philosophical reflection – unless you’re Tara (Alanna Masterson) entering a dark walker-filled rail tunnel with Glenn (Steven Yeun), in which case break a leg (literally … well almost) and unburden yourself of some existential guilt – “Us” was one big delicious musing on the nature of community, in all its myriad forms.

If you were Glenn and Maggie (Lauren Cohen), finally reunited after an intolerably long period apart (unless you find them insufferably twee in which case, not long enough), it manifested itself in a much longed for embrace seconds after a hail of machine gun fire from the calvary made of Abraham (Michael Cudlitz), Rosita (Christian Serratos) and Eugene (Josh McDermitt), Maggie, Bob (Lawrence Gilliard Jr.) and Sasha (Sonequa Martin-Green) had laid waste to an unavoidable crush of zombies (who seem to have mindless togetherness down to a fine art).

If you were Daryl (Norman Reedus), it took the form of a non-community of isolationist redneck souls, all fighting for their own survival with a tribal ethic of “claiming” that which they wanted even if it meant another went without; and yet oddly underpinned by a philosophy that, in name at least, prized the collective over the loner.

Or if you were Rick (Andrew Lincoln), Michonne (Danai Gurira) and Carl (Chandler Riggs), it expressed itself in some light hearted rail-walking competition, banter and sense of companionship hard fought for and now enjoyed for at least one perfect, happy – yes happy; Rick even smiled! – chocolate-sharing moment.

And finally, if you are Mary (Denise Crosby), the lone inhabitant it seems of the honey pot trap that is Terminus, the long walked for sanctuary that frankly is a million kinds of anxiety all wrapped in a faux-communal idyll, it’s a creepy sense of hospitality, threat and unnerving graciousness all rolled into one.

“Us” was an extended, and sometimes under-baked, pontification on whether the bonds of shared humanity stretch as far as the fractious nether regions of the apocalypse and if they are worth the effort (the answer was, on the whole, a great big smite the undead and watch each others backs YES)?

Following the alternating pattern of the second half of season 4, which has veered between intense one or two person stories, such as last week’s emotionally searing “The Grove”, and more general character-focused narratives which leap between two or three sets of characters in the one episode, “Us” took its time following four quite disparate yet soon to be joined groups.

A great deal of attention was given to Daryl and his band of unhappy redneck Lost Boys-types, who operated by a fairly primal code of ethics that roughly revolved around the idea that if you said the word “Claim!” before anyone else, then the just-killed rabbit or automative shelter or yes, roadside strawberry, was yours.

It wasn’t elegant, and was really only designed, in the words of group leader Joe (Jeff Kober), to “stop things going all Darwin”, and frankly fostered the close bonds of community with all the same efficacy of Bubonic Plague.

Daryl was right to observe that there “is no us”, something that was refuted almost immediately by Joe, a man given to long, meaningful but ultimately empty speeches on the need for togetherness and respect, punctuated by the long words of which he seems inordinately fond, none of which took away from the truth of Daryl’s pronouncement.

Despite the cloak of community that Joe seemed obsessed in draping himself in, the group Daryl was shanghaied into was the anti-us gathering, the very antithesis of the prison group, who despite the slow coming together post Governor-inititated cataclysm, were intent on the re-establishing the ties that bind.

No one was more focused on this than Glenn, who gave up his armour to Eugene, the man who supposedly knows what caused the plague (I suspect he doesn’t given his propensity for pursuing any delay tactic going) and who happily walked into an impenetrably dark railway tunnel filled to the brim as it turned out with walkers both mobile and not.

All that just to catch up to his beloved Maggie (the sheer, kid-in-a-candy-shop joy on his face when he found his wife alone should earn Steven Yeun an Emmy).

Going around would have been a hell of a lot easier, though it would have taken longer, and it was the option taken by Abraham, Rosita and the decidedly odd Eugene (still rockin’ the mullet!) who, spurred by their mission to get to Washington come hell or high water or swarming walkers, left Glenn and Tara to it and headed off to find a car to get them on their way.

That they were the cavalry was certain, and that Abraham particularly wasn’t happy about it (his mission is everything) was made quite clear, but they saved pretty much everyone, reunited Glenn and Maggie, who deservedly swooned in each other’s arms and re-established that love sweet love can conquer anything, including the decaying see through hands (and bodies) of the undead.

The real joy was in seeing two of the scattered prison groups come together, soon to be followed we would assume by Rick, Carl and Michonne, and Tyreese (Chad L. Coleman), Carol (Melissa McBride) and L’il Ass Kicker, Judith, although next week’s promo made it plain that the big reunion may not be without its complications and probable casualties.

“Us” overall was a workman episode with some goofy happy moments in it, designed to simply get the gang, or a reasonable chunk of it, back together and have them finally arrive in Terminus, which turned out to be pretty much as creepy as I imagined it would be.

The fact that it is barely protected at all with just an unguarded gate protecting things, and a hippie commune look to it, accentuated by the only person there, Mary, who looked all kinds of welcoming and “Run away! She’s mad!” all at once.

I am not sure just how great a threat it is but if I was Maggie and Glenn and the others, I wouldn’t be letting my guard down for a second, because especially in the apocalypse, “if it’s too good to be true, it probably is” isn’t simply a cliche anymore but a necessary life lesson.

You almost want to shout, Star Wars-like, that “It’s a trap!”

Greg Nicotero, who directed the episode, and the writers did a sterling job of giving us hope and terror in one smiling package reminding us all the way along that togetherness comes in a lot of forms, not all of them beneficial or worth pursuing.

The happy and comedic – in the case of Rick, Carl and Michonne almost goofy and silly  – moments that were scattered throughout “Us” were a nice antidote to last week’s joy-crushing events and next week’s doom-laden possibilities in the finale “A”, and were neatly contrasted throughout with the grim, enforced togetherness of Joe’s mob of self-serving individuals where lighter moments were very thin on the ground.

The deeply unsettling ending, with an almost beatifically calm Mary viewing like prey would view a meal, is a potent warning that those lighter moments should be treasured because, as always in The Walking Dead, apocalyptic hell could just around the corner, or at the end of the tracks as the case may be.

*Is Terminus the lair of cannibals? The Daily Beast contemplates various theories about what the supposed sanctuary could be.

And here is the trailer + 2 sneak peeks for The Walking Dead season 4 finale, “A” (with a creepy electronic announcement voiceover guaranteed to set your teeth on edge and your spine a-tingling) …

Oh and this week Mashable asked the question, via an infographic, of how long would you last in the zombie apocalypse? 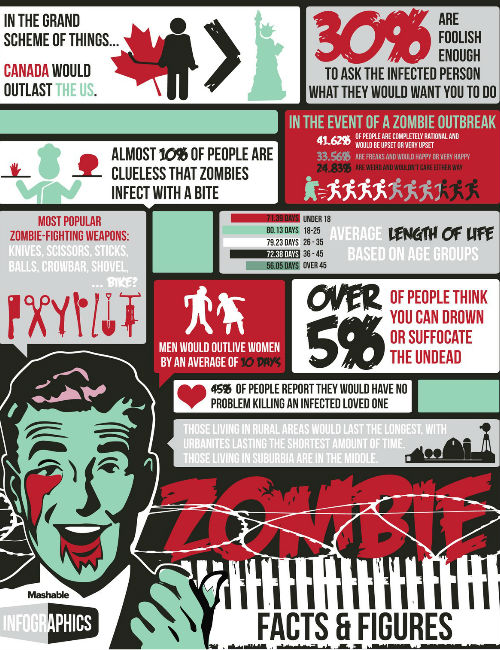