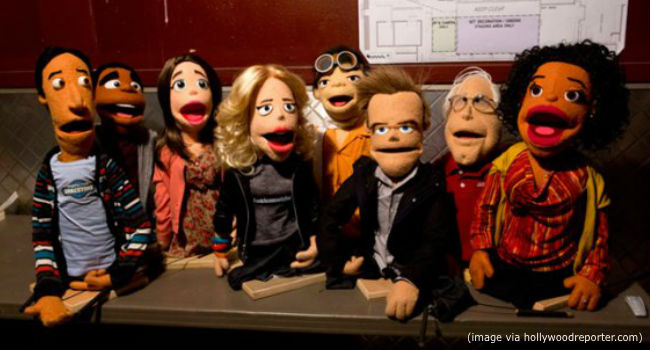 Well using them at the Dean’s behest to work out some issues they have after a fraught weekend in the woods (courtesy of a hot air balloon ride that goes awry), where they encounter a friendly local played by Seinfeld‘s Jason Alexander, leaves them feeling a tad uncomfortable around each other.

It may not be a course at Greendale College but it looks like Puppet Therapy 101 is a class they will all be taking whether they like it or not.

And I think it’s fair to say it will be unlike any therapy session we’ve ever seen.

Jung is in the house and he’s wearing stillettos and lingerie!

But it’s not just puppets that will be added to the always welcome wackiness on a show that delights in taking the box, jumping right out of it and splattering it with paintball splotches.

Speaking of which, the cast and producers revealed in a fun-filled Tuesday night session at Paleyfest this week – which is on my bucket list in a big way – that among the highlights of the rest of the season are a return to the paintball madness of previous seasons (this time though it doesn’t occupy the entire episode), a Freaky Friday-esque Troy and Abed episode penned by the show’s very own Jim Rash (who’s a noted screenwriter in his own right having won a small trinket called an Oscar for The Descendants), and the introduction of Jeff’s dad (played by James Brolin) and his brother played by Adam Devine (Pitch Perfect).

Says Joel Mchale of the episode where he and his dad sort out some issues (quoted on hollywoodreporter.com):

“It is quite intense between Jeff and his dad. Thank God for Gillian [Jacobs] and Adam, who knock it out of the park. It gets pretty heavy.”

I doubt that is the sum total of all the imaginative madness that Community has in store and we can only hope that the show does get renewed come May and we get to enjoy it for the much touted #sixseasonsandamovie (although comments made at the panel reveal a pragmatic acceptance of the fact that four years may be it – “”We made it four years, and that’s a great thing” said Yvette Nicole Brown, who plays Shirley, with Joel McHale adding, “If there is a season five, we end up on Serenity“)