WHAT IS STAR WARS DAY EXACTLY?
May 4 is recognized every year by fans of the films. Everything from screenings to special events and festivities are held globally to celebrate the books, films and culture of Star Wars. The day’s tagline is “May the fourth be with you,” a re-working of one of the film’s most popular lines, of course, “May the force be with you.” (via Huffington Post)

If you’re going to celebrate Star Wars Day with anyone – other than, of course, Darth Vader, Han Solo and Luke and Leia aka weirdest family get together ever – then surely top of the list must be the gang from The Big Bang Theory?

That’s what the show’s producers thought too, which is why The Most Popular Sitcom in the World, in concert with Lucasfilm (both are owned by the Disney corporation) are joining forces to mark the day with an episode infused with more midichlorians that you can poke a Jedi master at.

The episode, which is entitled “The Proton Transmogrification”, features the return of Sheldon’s childhood hero, and recurring character Professor Proton (the legendary Bob Newhart), who will appear in a series of visions Sheldon has on the day, some of which take place on a carefully-recreated Dagobah (the planet where Luke received his rushed Jedi tutelage from the awesome Yoda).

Bob Newhart will also appear as an iconic Star Wars character, though precisely which one is being kept carefully under wraps for now.

The great joy of the episode is likely going to be seeing the whole Star Wars world filtered through Sheldon’s weirdly ordered mind which will guarantee that the Force will be strong with this episode of The Big bang Theory.

This is definitely the sitcom you are looking for on Star Wars Day.

Of course the BIG NEWS in the lead up to the Star Wars day of days was the announcement of the full cast for the J J Abrams-directed and produced seventh episode of the series.

Flanked by a photo of the full cast at the first table read through of the script in London – io9 had some fun with who sat where – Disney and Lucasfilm confirmed or dashed months of feverish rumours about who would or wouldn’t be in the eagerly-anticipated film.

Back, of course, are Luke (Mark Hamill), Leia (Carrie Fisher) and Han Solo (Harrison Ford) but that’s not really a surprise since George Lucas accidentally revealed their participation a good 18 months ago. (Check out the tweets that Mark Hamill and Carrie Fisher sent out following the table read.)

And what would a Star Wars movie be without C-3PO (Anthony Daniels), R2D2 and Chewbacca (Peter Mayhew), all of whom are present and account for too.

What is really of interest is who’s snagged the other roles on offer.

For that we turn to the press release on the official Star Wars site , which also featured the photo below:

The Star Wars team is thrilled to announce the cast of Star Wars: Episode VII.

Director J.J. Abrams says, “We are so excited to finally share the cast of Star Wars: Episode VII. It is both thrilling and surreal to watch the beloved original cast and these brilliant new performers come together to bring this world to life, once again. We start shooting in a couple of weeks, and everyone is doing their best to make the fans proud.”

Star Wars: Episode VII is being directed by J.J. Abrams from a screenplay by Lawrence Kasdan and Abrams. Kathleen Kennedy, J.J. Abrams, and Bryan Burk are producing, and John Williams returns as the composer. The movie opens worldwide on December 18, 2015.

Now if you’re wondering who some of these people are, you’re not alone.

Fans of indie cinema will recognise Oscar Isaac for instance from the critically-acclaimed movie Inside Lllewyn Davis while Adam Driver would be known from HBO’s Girls and movies like Tracks, and Gleeson from playing the part  of Will Weasley in the Harry Potter movies and his leading role in About Time.

Serkis will be well know to any fans of The Lord of the Rings or The Hobbit movies, where he played the creepily engaging Gollum – he is the master of motion capture technology, given real emotion and depth to the characters he plays – and Max von Sydow is the legendary Swedish actor who among many illustrious roles, play one very crucial part in a movie that was instrumental in the creation of the Star Wars franchise:

“And then there’s 85-year old Max Von Sydow, the legendary Swedish actor renowned for playing villains such as Emperor Ming the Merciless in Flash Gordon — coincidentally enough, the franchise that inspired Lucas to write Star Wars in the first place.” (source: Mashable)

But relative unknowns Steven Boyega and Daisy Ridley, who are tipped to play the leads in the new Star Wars movie, may leave many fans scratching their heads.

Boyega is probably best known for Attack the Block, a low budget British film in which a gang of teenagers defend their apartment tower and by extension the earth itself from an alien invasion.

He will also be appearing with Kiefer Sutherland in 24: Live Another Day.

Ridley has an even lower profile, having appeared in British TV series like Selfridges and this very cool short film, brought to our attention by Film School Rejects:

*The Guardian has very helpfully provided a quick rundown of who is who in the new Star Wars zoo and what they’ve done up ’til this point.

Now not everyone is thrilled with the casting decisions with many people taking issue with the fact that once again Star Wars has gone for a very male-centric cast. (Although some reports suggest that at least one more major female role is yet to be cast.)

It generated tweets like the two following, one in particular by Laura Hudson who posted a link to her excellent article Leia Is Not Enough: Star Wars and the Woman Problem in Hollywood. 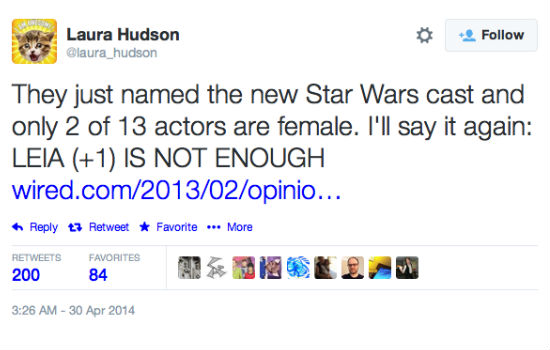 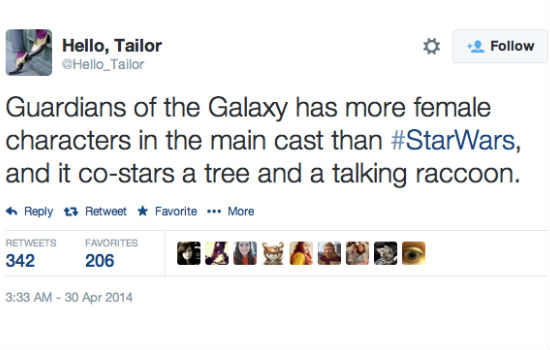 Somewhat controversially too, George Lucas also announced a few days earlier than the Star Wars canon would only recognise the six films and The Clone Wars TV series, effectively taking out all the books and comics that have populated what is known as the Expanded Universe.

All this controversy aside, and I don’t see either of these major issues going away too quickly given the passion of Star Wars fans, the general reaction has been excitement (and not a little relief given the interminable months of rumours and counter-rumours about the movie) that we finally know some concrete details about the next film instalment of this amazing saga.

If waiting till the end of next year sounds too much of a big ask to get your next Star Wars fix, you can always check out this trailer for Star Wars: Rebels (above), an in-canon animated series debuting on Disney HD in the northern autumn this year.

* Thanks to Hey U Guys, we have been wished a Happy Star Wars Day! by J J Abrams, producer of course of the next instalment in the Star Wars Saga, and Lawrence Kasdan, one of the legendary people behind the franchise.

And on a much lighter note, Bonnie Burton from Crave shows you how to fashion your very own tres fashionable Princess Leia buns for the big day, which as she notes on CNET is “so simple even a Wookiee could make it”.

And if that’s not enough Star Wars-based arts and crafts for you, then why not make a Chewbacca tablet cosy? Go on you know, you want to!

Now there’s no excuse not to look your very galactic best!

That however is not the end of the Star Wars artsy-craftiness.

In both the USA and UK, artists were given nice white blank stormtrooper helmets and told to go where their muse took them.

The results were nothing less than amazing.

In the UK, a group of contemporary artists were given helmets from the original designer of the Stormtrooper outfits, Andrew Ainsworth, to bedeck and bedazzle, in aid of raising funds for the Missing Tom Fund. Full report here.
(image above is from this exhibition.)

While in L.A., according to Bonnie Burton at Cnet, “Disney artists from Lucasfilm, Industrial Light & Magic, Marvel, and Pixar, as well as prominent street artists and Neff product designers, were given mini Stormtrooper helmets and asked to transform them into art” with the impressive results going on show at the Robert Vargas Gallery.

Of course, if you just prefer to buy your Star Wars memorabilia than make it yourself, Carrie Fisher is selling off a lot of her mementos. But you’d better be quick!

* Oh and if you’ve ever wondered, and frankly who hasn’t, how much Jabba the Hut’s Palace would be worth, one real estate agent has happily worked it out for you. Yes really!

May the Fourth most definitely be with you.

Oh, and if you are out and about celebrating at the Mos Eisley Cantina, remember to switch off your mobile phone, or as College Humour points out, this could happen …