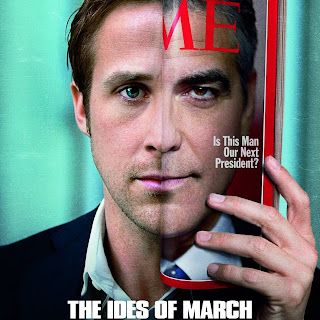 Purity of belief is a powerful thing.

It undergirds the faithful, drives the true believer and blinds the zealot. It is a virtue. It is a liability. It is the catalyst for war and the handmaiden of peace…

… and it is a stranger to the art of politics, which speaks of belief in all things high and mighty, but dips as low as it has to on an almost continual basis. And it is this very thing which almost undoes Stephen Meyers (Ryan Gosling), the central figure in this brilliantly executed tale about the quest for power, who works as a media advisor in the Presidential campaign of Governor Mike Morris. He works tirelessly for a man he believes is the embodiment of all the things he holds sacred, even stating at one point that he is married to the campaign. More disillusioned colleagues gently mock his untainted devotion to a man who they believe is eminently fallible since he is, after all, a politician, but Stephen will not listen.

In a way it is refreshing that he holds onto his noble belief in the pursuit of power since he stands as a man of true ideals among a crowd of diminished toilers in the black art of politics. But you soon realise that while he isn’t listening to his jaundiced colleagues, he also isn’t paying any heed to the voice within. He makes a subtle compromise here, a small but ultimately significant mistake there, and before he knows it, he is sliding down a slippery slope that may lead to the death of the innocent abroad, if he ever truly existed in the first place. Its true that he does hold strongly, and with a purity of belief to the laudable ideals he espouses, but he is blind to the fact that he has set out on the same compromised path as his colleagues, and so his fall, such as it is, is all the more tragic since he doesn’t it coming.

This movie, which also features fine performances by Evan Rachel Wood as the ingenue and intern, Molly , Phillip Seymour Hoffman as Morris’s campaign director, Paul Zara, and Paul Giamatti as a rival campaign director, deconstructs the pursuit of political power in a subtle way, never resorting to in-your-face tactics to make its point. Indeed, it is the slow deadly narrative reveal that continues right up till the end that proves much more powerful a lesson than a slap in the face ever would.

It is a cautionary tale that we should all heed. Believe all you want, and hold fast to that which you believe, but always remain aware that we are all fallible, and and that purity of belief can curse as much as it can bless.