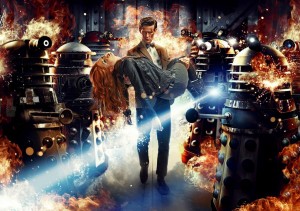 I have to say that the new Dr Who trailer released by the BBC looks amazing, and has so much “blockbuster-yness” in it than I am expecting him to be battling Jaws, Forrest Gump, all the dinosaurs from Jurassic Park, and several of Marvel’s superheroes all in one almighty busy episode!

That may not happen but yes it does have dinosaurs … on a spaceship! And Daleks … and Weeping Angels … and bullying cyborgs in ye olde Wild West towns. It does look supremely spectacular, full on edge-of-your-seat stuff, and frankly I am looking forward on one visceral level to rides so fast and furious and action-packed that I will barely have time to stop and think …

… but therein lies the problem alas. While I love Executive Producer Steven Moffat’s ability to come up with larger than life tableaus for the Doctor, and some insanely intricate story lines to go along with them,  I find myself getting to the end of an episode, and realising once the heat of the moment has dissipated, the dust has settled, and the Daleks have been seen to one more time, that I have absolutely no idea what really took place.

Yes it’s impressive. Gee-golly-whiz-will-you-look-at-that impressive, and it is so easy to get lost in, and be entertained by, the intricate conspiracy arcs, Matt Smith’s playful rendering of the 900 year old Time Lord, and the endless running here and running there that drives each and every episode, that you fail to realise that what these post-Russell T Davies and post-David Tennant new episodes  are missing is a substantial underpinning.

An emotional and narrative depth that anchors them. That takes them beyond mere popcorn-chomping blistering mini-action flicks and into the realm of memorable soul-stirring television that you will remember long after the episode has finished. I can still remember the poignancy of “The Girl in the Fireplace” where the Doctor, played by David Tennant, is there for every stage of this noble Frenchwoman’s life.

The irony is this episode, which was executive produced by Russell T Davies, was written by current executive producer Steven Moffat, and contains so much of what I think is missing from the current doctor’s outings – real depth of emotion, an elegant taut narrative, and nuanced acting.

I want to make it clear that I do still like watching the show – the stories are ambitious and fantastically entertaining, Matt Smith channels a joyous love of  both discovering new things (or least watching his companions do so) and enacting justice, which have always been my two favourite hallmarks of the Doctor, and visually it looks better than ever.

But it is missing that special something that would elevate to the lofty heights of Must See, Always Remembered TV drama, and I can’t help wondering if season 7, impressive though it appears, may yet again fail to deliver truly lasting television.

One can only hope that along with all the blockbuster-yness is an equally healthy dose of heart and soul, and narratives that make sense, as well as dazzle the senses. If they manage that, it will be the perfect marriage of style and substance and I shall rejoice.

You can rest assured I will be watching closely when the first half of season 7 – the second half of the 14 episodes will be telecast in 2013 – hits the screen a little later this month, and being the optimist I am, wishing upon every finger and toe I have that this show I love finally gets all its creative ducks in a row (until, of course, they’re exterminated by the Daleks which let’s face it, could happen).