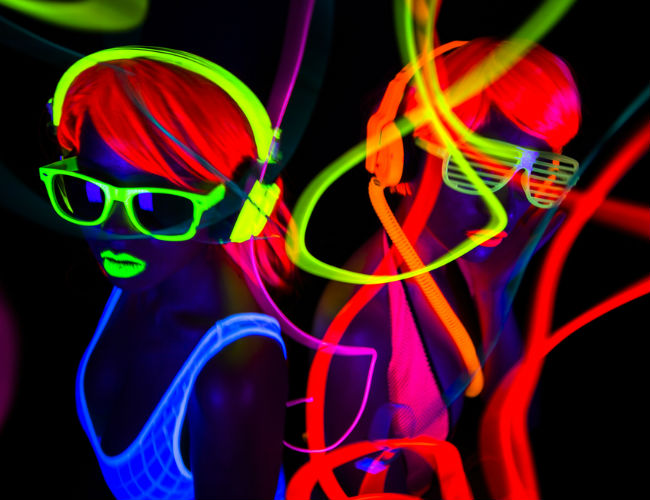 Who wants a beige life?

No one in their right mind that’s who, which is why you need to listen to artists like the ones following who chart their own course, put real thought into their artistic expression and pour it into songs so unique and vividly listenable that you’ll realise, all over again, how richly varied life can be.

And if ever the beige comes creeping back in, and it happens despite our best efforts thanks to daily routine and exhaustion, then throw these songs on, soak in them and be reawakened to a life lived far from the boring centre.

Setting out on her own after eight years as part of Swedish electronic music and audiovisual project iamamiwhoami, ionnalee aka Jonna Lee has gifted us with the fruits of her many talents including singing/songwriting and visual directing in the form of the lushly ethereal beauty of “Not Human”.

Beginning with some trippy pounding beats, “Not Human” has a melodic vibrancy to it, grounded and enriched by ionnalee’s emotionally-resonant voice with the song, as We Are: The Guard points out, creatively paying tribute to the way romantic love can truly change us:

“…. the song is a larger-than-life piece of electronic pop, with a powerfully rhythmic instrumental acting as a backdrop to Jonna’s narrative about her lover giving her shape-shifting abilities: ‘Oh, oh! You make my waters flow/Now look how tall I grow/I’m not human/Oh, oh! With you, it’s magical/The urge is animal/I’m not human.'”

As imaginative celebrations of love’s immense power to make us someone altogether different, “Not Human” takes some beating, it’s gorgeously-transcendent music the perfect backdrop to life-affirming lyrics.

Kate Bush, one of pop music’s most original and brilliantly clever voices, has inspired a great many people; among them is Ariel Pink who penned “For Kate I Wait” as part of his solo project Haunted Graffiti which he used up until 2014.

Similarly-inspired it turns out is Butter aka Lola Blanc, a Los Angeles-based artist who covers Pink’s seminal track, infusing this standard bearer song of Hypnagogic pop (basically chilled pop that draws heavily on nostalgia and older styles of music such as that of the 1980s) with a distinctly gender-different perspective as We Are: The Guard points out in their description of this catchy track:

“[she] succeeds in bringing a whole different dimension to the hypnagogic pop piece, which originally appeared on 2000’s The Doldrums. Featuring her starry-eyed vocals meeting an 80s-indebted, synth-speckled production courtesy of Night Sequels and Freescha’s Nick Huntington, it’s an otherworldly cover that drains the song of most of its testosterone, refocusing it instead through a dazzling female gaze.”

It’s rich, bright and breezy, a wash of amped-up etherealness that surges and bounces along while still retaining lush emotionally-introspective qualities.

“Gloves Off” by Future War Bride

Oh, but “Gloves Off” is a lot of fuzzy atmospheric rockin’ fun!

The debut single from Danish outfit Future War Bride, the song has got a whole of Bowie/Queen-esque sonic weirdness going on which grants a deliciously psychedelic vibe to this fantastically out there song.

And if you think it’s whole lot of musical experimentation with no real purpose, think again:

“The face down generation is, on a spiritual level, going belly up in the hunt for the next opportunity. It’s a weird and cruel philosophy that leads only one way, creating miserable people in a miserable world. This is not a game, and people are not athletes. Maybe it’s time to take the gloves off and start fighting with winners and losers mentality.” (source: We Are: The Guard)

So there you have it – some very retro musical influences with some very pithy, off-the-moment sentiments that together creates a thoroughly original track that will have you captivated and thinking hard for quite some time.

One of the distinguishing marks of many new music artists is a scant or near-to-nonexistent bio. Is it an attempt at mystery? Of wanting the music to speak for itself unadorned by a biographical muddying of the waters? A case of not enough time what with music creating and everything?

Whatever’s behind it, new British artist Queenie is among their number, arriving with no real bio but a debut single “I’m Ready”, that is a giddily upbeat as it lushly and darkly plunges into a swirl of modern electronic music that is brilliantly, amazingly, insanely catchy.

With her sound described by We Are: The Guard as “the love child of Robyn and Lily Allen”, “I’m Ready” surges on a wave of densely melodic synth beats and a voice that fits into the musical scheme of things so perfectly that you feel like the artist has always been singing the song.

You know, whoever the hell she may be …

“Spinning on Blue” by Bien

An indie-pop Nashville, Tennessee-based trio that includes Jessie Early, Angela Lauer and producer Tim Lauer, Bien is a band that began with the idealistic notion of creating music free from any and all limitations (but not without “confetti” and “fun” according the band’s Facebook page About us section).

The latest fruit of their un-hemmed in labours, following their debut EP in 2016, “Spinning Blue” is set very much in a musical tradition which they, delightfully and somewhat quirkily describe as “dreamy synths, unique melodies, sweeping strings, and dance-y beats, [with] the songs cover[ing] a colorful spectrum of emotion.”

It’s an exquisitely-wrought piece of pitch-perfect dream pop awash in beautifully removed vocals that soar lightly and brightly across a lithe, steadily pounding musical landscape that seems to stretch on into infinity.

The song is a reminder, says the band, that we should all stop and remember that even in the midst of the fraught mess that is 2017, beauty and community should be sought and can be found:

“There’s so much going on in the world right now, and we really wanted to write something that encouraged people to remember we’re all sharing this planet. It’s our kind of ‘seize the day’ song that reminds us to take in the beauty and wonder of the world and the people around us.” (source: We Are: The Guard)

If there’s one music artist you can count to come up with a truly original, imaginative, envelope-pushing visual feast for her songs, it’s Björk.

Her new song for “The Gate”, the lead single from her upcoming album Utopia, is no exception, a crazy, colourful feast for the eyes that is the result of the artist’s collaboration, according to SPIN, with “Andrew Thomas Huang, the artist and filmmaker who also directed videos for Björk’s Biophilia album and the VR clips for Vulnicura, and Alessandro Michele, creative director at Gucci.”