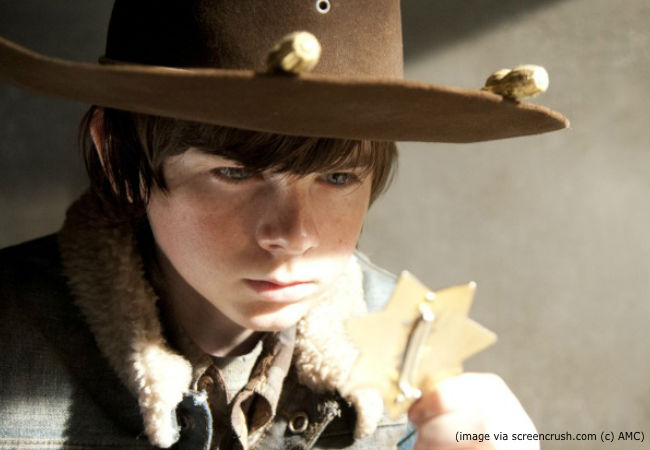 In last week’s penultimate episode, Rick affirmed to his beleaguered group that “we are the greater good”, invoking a sense of The Three Musketeers‘ mantra, “all for one, one for all,” and recanting his season 2 ending declaration of himself as dictator for life.

Contrast that with the Governor’s volcanically-angry rebuttal to Milton’s entreaties to mercy and humanity this week, from a man wholly incapable of either, that the only words to live (or die) by were “kill or die … or die and kill.”

Markedly different approaches to the same nightmarish proposition, which effectively went to war in the season 3 finale, “Welcome to the Tombs”.

And what a war it turned out to be.

In line with his brutal scorched earth policy, the Governor, callously and with an intent cold-blooded enough to chill even the blood-thirstiest soul, dispatched Milton, with a few savage knife thrusts to the gut, to a thoroughly underserved fate as a walker-assassin, locking the dying man in the same room as a resolute but terrified Andrea.

Tied to the dentist-chair-from-hell that we witnessed in the Governor’s own Mengele-esque chamber of horrors last week, Andrea was then locked in a race against time to reach for, and use, a set of pliers that Milton had hid behind her chair as one last act of defiance against the man he now rightly, and belatedly, believed to be a madman.

It was a courageous end for Milton at least, who fought with everything he had to forestall his death, and horrifying re-animation as a walker, a process that may not sound like a barrel of laughs, and wasn’t, but which nonetheless provided some slivers of amusement as Milton, appearing to die on at least three occasions, rallied, reassuring Andrea each time that he hadn’t died yet.

Not that these breadcrumbs of humour made her task any less fraught or time-sensitive, as she raced, with it must be said the odd but emotionally-impacting detour for heart-to-heart conversations with her newly acquired ally, who in death turned out to be her second greatest foe (no prizes for guessing who takes out the number one prize) and sadly one she couldn’t beat off, leaving her with a nasty zombie-turning bite to the neck.

And in a scene that was heartbreakingly sad, she had no choice but to end it all with just Michonne stoically present to the last, refusing to leave her close friend even though she could have joined Rick, Daryl and Tyreese just outside the door (their presence there will be explained shortly).

It was a final affirmation of the unflinching nature of their friendship that had endured despite their philosophical differences and the resulting geographical separation, and a testament to the character of Michonne, who also took the chance back at the jail to tell Rick she understood why he had almost turned her over to the Governor, thanking him for taking a chance on her.

Death is admittedly an ever present threat in the bleak world of The Walking Dead, and yes Andrea has, unfairly in my view, attracted a great deal of censure from quite a number of the show’s fans, but this ranks as one of the sadder and more touching moments on a show that has more than its fair share of them.

It was also, much like Merle’s, a noble death where Andrea was at least able to meet her maker knowing that she had tried to avert the sort of bloody Shakespearian tragedy unfolding around her.

She may not have succeeded but it didn’t not lessen the nobility of her intent and made her demise, after three seasons on the show, all the more poignant.

Nobility however is something as foreign to the Governor as it was innate to Andrea.

In this action-packed finale, even the pretense of seeking to rebuild civilisation in his cult-like experiment at Woodbury was dropped, as a blood-soaked revengeful lust replaced any talk of idealistic purpose.

But it wasn’t the much-expected raid on the prison compound that truly shocked.

Yes it was violent, and Blitzkrieg-like in its efficiency, but Rick and his group were ready for the interlopers, and saw them off relatively quickly with a combination of strategic slight-of-hand, firepower from unexpected places, and a raiding party that save for the Governor’s right-hand men, was not well-versed in fighting battles of any kind.

No, what was truly viscerally stomach-churningly shocking was the Governor’s reaction when the good citizens of Woodbury, fresh from their routing at the prison, and newly aware that they had been sold a propaganda lemon by their leader, rounded on him, and made it very clear they wouldn’t participate in any more raids.

With barely a second’s pause, and furious madness dancing across his eyes, he opened fire on them all, shooting repeatedly and without remorse until they all lay dead, scattered across the road the convoy had stopped in, the innocent casualties of a murderous butcher denied his triumphant moment of revenge.

The only ones left alive were three men standing behind him, including right hand man Martinez, and Allen, part of Tyreese’s small group, who watched his son die at Merle’s hands the week before, all the motivation he needed for joining the failed raid on the prison (one by the way that Tyreese and Sasha sensibly declined to join, remaining at the prison to guard the women and children left behind at Woodbury).

Realising that his grief had compelled to make a deal with a madman, Allen attempted to take the Governor out but instead found himself a victim of the dictator’s murderous rage, falling where he stood.

With little choice but to follow the Governor, Martinez and ?? jump into van and take off with him, leaving Rick, Daryl and Michonne to put the once-trusting ex-citizens of Woodbury out of their misery, and rescue the one survivor of the massacre, Karen, who played dead long enough to evade it actually befalling her.

With her in hand, they made it to Woodbury, rescued the survivors, tried to rescue poor doomed Andrea and having said their heartbreaking goodbyes to her, came back home, well aware that a deranged man is out there somewhere, literally gunning for them.

It promises to be a dramatic season 4 if only for that reason alone.

And if all that wasn’t enough, the seeds of future trouble were sown when Carl, having soaked up the twisted morality of a world gone mad, and watched the examples of others around him, including his father, shot a fleeing Woodbury teenager at point blank range, with a shocked Hershel looking on, even as the then enemy combatant was willingly, if slowly, surrendering his gun.

His attempts to spin the truth of what happened to his dad were thwarted by Hershel’s admission of what really happened, but undeterred and with a strong sense that he had done the “right” thing, he refused to talk meaningfully to Rick about it, instead lecturing him on the ways of the new world they’re living in.

It’s not a promising development, and offers the very real possibilities of psychopaths, both and without the group.

The world, troubling though it is, just got a whole lot more troublesome.

*Here’s a fascinating look at the alternate endings shot for this thrilling finale.

And a look ahead at what season 4 holds in store …

* and just in case my take on events was a wee bit too serious for you, here’s a superbly funny review of the episode by the Sydney Morning Herald’s Entertainment Editor, Giles Hardie … enjoy.