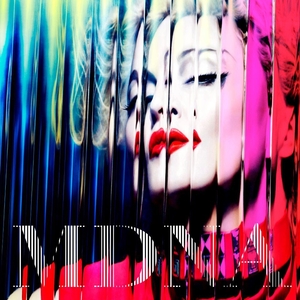 Madonna has a new album out March 27 my friends and I am excited!
I love the cover, which is bright, colourful and sassy. I love the first single, Give Me All Your Luvin’ (which was leaked a little while back), which is 80s pop confectionary of the highest order, and instantly engaging.
And I love the fact that she continues to re-invent herself, both musically and otherwise – her selection of the uber-talented Martin Solveig to produce the album is a stroke of genius, and pushes her musical envelope in all sorts of immensely cool ways – and not listen to the carping and criticism directed at her. Whatever is said about her, she is a talented, clever artist with a great deal still to offer.
Here’s to being true to yourself and entertaining people in the process Madonna!