It all started one otherwise uneventful Sunday morning a few weeks ago.

Wanting something to watch after Insiders (a national political program on Australia’s government-funded ABC network that features a moderator and three journalist discussing the week in federal politics) had run its course, and I was waiting for my partner to have his shower, I channel surfed across to SBS, the other government run network.

While I had traditionally ignored  this network on weekend mornings, I learnt very quickly that that had been a mistake, and that lurking in a time slot which is traditionally home to cartoons, or yes, serious political and business discussion, was the pop culture gem, Pop Asia, which brings together a vast range of music from the phenomenon that is J-pop (Japanese pop) and K-pop (Korean pop) .

What exploded across my screen as I discovered this perfectly package pop music show, with all the force and colour of a glitter bomb that could no longer contain its glittery goodness, was a clip so candy-coloured, and shamelessly exuberant, and a song so infectiously upbeat, that I could not tear my eyes away.

Not even for a second.

The song, “PonPonPon” by Japanese pop (J-Pop) singer, Kyary Pamyu Pamyu, was gloriously, eye-blindingly gaudy in the best way possible, and the sheer joy of her performance had me not only listening to the entire song, but singing along too once I’d mastered the chorus (learning Japanese at uni had its benefits) and yes, downloading it, almost immediately.

It appealed on a number of levels.

The song itself was unapologetically upbeat, embodying a giddy schoolgirl-esque love of bright happy melodies and jaunty lines that bounced along like Smurfs on a sugar high. The clip, set in a giant nursery-meets-toy-store was invaded by all manner of weird, unusual creatures, all of whom were welcomed with open arms by the irrepressibly cute singer, and the unbridled imagination powering this visually over the top extravaganza didn’t drop down into beige-coloured banality for even one second.

I grant you that this sort of colour-overload isn’t for everyone,  and could be easily dismissed as light, fluffy nonsense, but I instantly adored it, and found out some post-Pop Asia Googling, that a lot of serious thought had gone into both the look of the video and the meaning behind each and every image.

The aim, it turns out, of art director Masuda Sebastien, of trendy Japanese fashion brand 6%DOKIDOKI, and his partner in fabulous visual styling, fashion stylist Kumiko Iijima, was to combine the Japanese concept of “kawaii” (cute) with a liberal dose of the sort of weirdness routinely found on Japanese game shows, a retro nod iconic Japanese TV programs from the 60s and 70s, and a cartoonish sensibility gleaned from Japanese anime such as Dragon Ball.

It is as good an example of any of the fact that the simplest looking and sounding pop music is usually the kind that has has a great deal of thought and care go into it, created and shaped by immensely talented people with a unique view of the world. That was the case with ABBA, and is certainly the case with the gorgeous Kyary Pamyu Pamyu.

And with many of the acts who followed in the half hour left of Pop Asia when I had belatedly tuned in.

Kyary Pamyu Pamyu, who only released the single in July 2011, is not alone in her devotion to sweet, addictive, and to my surprise, utterly compelling sugary pop, delivered by bright and smiling popettes, or boybands without number, immaculately dressed in a range of daring but trendy outfits. 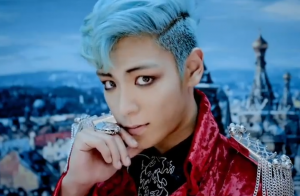 And many of the songs are not just good, they are excellent. In common with song charts in many Western countries, there are a fair number of tunes that should have never seen the light of day, but there are far more songs that deserve not just a listen but inclusion in  music collections the world over.

Take the Korean boyband, SHINee, who strut onto the stage of the clip for their song “Lucifer” with all the bravado and swagger of a toughened street gang – albeit a fantastically well appointed street gang with impeccable and up-to-the-minute taste in clothing – before breaking into dance routines so exquisitely well choreographed and timed it would make the angels weep.

The song more than matches its visual packaging, daring you not to get up and dance and stay dancing. This is not throwaway pop of any kind but rather real, enduring music that will, dare I say it, stand the test of time. It certainly struck a chord with K-pop lovers, becoming the sixth bestselling album of 2010 in South Korea, and spawning a series of highly successful singles, including the deliciously repeat-listen “Lucifer”. The members of SHINee today don’t just turn up and sing either with songs “Your Name” and “Juliette” bearing lyrics written by the band.

The point is these are seriously talented people who make great music and it is earning bands like SHINee, and 2NE1, and singers like Seo In-Guk, Kyary Pamyu Pamyu and T.O.P. a devoted following around the world.

But neither J-pop or K-pop, are musical flashes in the pan.

The rise of J-pop, which came to dominate the Japanese musical scene from the 1990s onwards, started way back in the early 1970s when Japanese rock bands like Happy End fused Beatles-esque harmonies with rock, creating a wholly unique type of sound. It was further augmented in the 1980s by the New Wave movement, which had as profound an effect in Japan as it did the West, which gave rise to iconic bands like Yellow Magic Orchestra and Southern All Stars. It has now become so ubiquitous that the term J-pop, coined by the Japanese media to define music that is uniquely Japanese in sound, is now used to refer to pretty much all contemporary Japanese music. (You can read more here.)

Similarly K-pop, which encompasses a broad range of music running the gamut from dance to electronica to hip-hop and R&B has become a handy shorthand term for modern Korean popular music. While the term usually refers to Korean pop idols when used in an international setting, it carries a much broader definition with Korea itself.

The origins of K-pop could be argued to extend back as far as the 1920s but it is generally regarded as beginning in the 1990s with Seo Taiji and Boys (1992) who presaged the creation of the first boybands and girl groups by Korean music impresario, Lee Soo Man, and a slew of other musical entrepreneurs , and K-pop as a worldwide pop force began its inexorable rise. (You can read more here.)

Both forms of pop have spread across the world like wildfire, and become wildly popular thanks to expat populations, the rise of the internet which has made musical forms around the world accessible to people who previously wouldn’t have known of its existence, and the fact that it is great music that embodies all the qualities that has made pop music the dominant genre across the planet.

A program like Pop Asia, which broadcasts 8.30 to 10.30 every Sunday on SBS, as well as continuously streaming the “very best non-stop Asian pop hits in Mandarin, Cantonese, Japanese, Korean and more” here, is right on the crest of this wave of the zeitgeist, and frankly with such a groundswell of popularity behind it, I am amazed that I missed it for so long.

Rest assured, it is firmly on my pop culture radar now, and will be filling this blog, and my iPod for quite some time to come.