This may date me badly (OK it definitely will!) but I still remember when a movie would come out with one poster and one poster only.

And you wouldn’t get to see it till there was space in the “Coming Soon” poster bays at the local cinema, which weren’t considerable at the one screening room cinema I saw many of my first films at in Ballina in the far north of NSW (Australia).

Now of course, posters are on the internet, long before they reach the cinema itself, released in a profusion of colours and styles (which must send the collecting purists into a lather of completist agony).

Some might see that development as overkill but frankly I love the idea of endless successions of promotional artwork for a movie.

It gives you a chance to see how people associated with the film have interpreted it, and the best of it of course will whet your appetite still further and be an artistic statement in and of itself.

The following examples of poster art certainly fit that bill as far as I am concerned.

SNAPSHOT
The film tells the story of a greedy lawyer (Michael Fassbender) who finds himself in over his head when he decides to delve into the dark world of drug trafficking. Along the way we meet his naive girlfriend Laura (Penelope Cruz), Westray (Brad Pitt), a seedy middleman, Reiner and Malkina (Javier Bardem and Cameron Diaz), a mysterious and dangerous couple, and Ruth (Rosie Pérez), a prison inmate represented by the lawyer. (source: wikipedia)

Along with the official movie poster for Ridley Scott’s The Counsellor, the screenplay for which was penned by one Cormac McCarthy (The Road, among other notable works of literature), the movie studio has released a series of arresting character posters for all the main figures in the film.

They are staring so intently and with such purpose that you simply can’t look away.

It captures beautifully what we know of the movie – that it will be intense, dramatic, and a searing excursion into the darker side of humanity.

If eyes (and unsmiling steely visages) are the windows to the soul, then that’s pretty much all I am seeing in all these posters.

And they are magnificent.

I can’t wait to see The Counsellor when it opens in USA on 25 October 2013, and Australia on 14 November.

* You can see the rest of the posters at moviesinfocus.co.uk.

SNAPSHOT
Marvel’s Thor: The Dark World continues the big-screen adventures of Thor, the Mighty Avenger, as he battles to save Earth and all the Nine Realms from a shadowy enemy that predates the universe itself.  In the aftermath of Marvel’s Thor and Marvel’s The Avengers, Thor fights to restore order across the cosmos…but an ancient race led by the vengeful Malekith returns to plunge the universe back into darkness.  Faced with an enemy that even Odin and Asgard cannot withstand, Thor must embark on his most perilous and personal journey yet, one that will reunite him with Jane Foster and force him to sacrifice everything to save us all. (source: screenrant.com)

It’s a movie that features larger than life, theatrical characters locked in a titanic battle to the death for the future of humanity and the planet it calls home so it makes perfect sense that all the posters match that tone and style.

They are intensely colourful, seem to tower over you even in 2D form, and capture the look and style of the characters perfectly.

They have that Cecil B DeMille “look at me!” grandeur that fits well with the majestic Thor and even those who would oppose him.

And they manage to get me, a man who isn’t into superhero posters as much as others may be, genuinely excited about what lies ahead.

Thor: The Dark World opens in Australia on 31 October 2013 and USA on 8 November.

BLUE IS THE WARMEST COLOUR

SNAPSHOT
The film is based on Julie Maroh’s graphic novel, and follows Adèle (Exarchopoulos), a young woman whose longings,  ecstasies and losses are charted across a span of several years. She meets Emma (Seydoux), the older woman that excites her desire and becomes the love of her life. As their relationship blossoms and stumbles, we witness gestures, embraces, furtive exchanges, and arias of joy and devastation. (source: empireonline.com)

Despite the fact that Blue is Warmest Colour’s two stars, Léa Seydoux and Adèle Exarchopoulos, have been openly critical of the movie’s director Abdellatif Kechiche, who in turn has denounced his own movie and said it should never be released, the film has attracted a great deal of praise not least from Steven Spielberg in his role as jury president at Cannes where it was awarded the coveted Palme d’Or.

It has also been criticised in almost equal measure for its graphic lesbian scenes and less than faithful adaption of its source material, the graphic novel by Julie Maroh.

But overwhelmingly the film has been lauded as a emotionally mature coming of age tale that doesn’t pull any punches, held up as a must see film by anyone who values authentic tales of people emerging into the first full throes of adulthood.

We can see for ourselves whether all the praise or criticism is warranted when Blue is the Warmest Colour opens in France on 9 October 2013, and USA on 25 October (after premiering at the New York Film Festival on 11 October).

SNAPSHOT
In the late 1800s, a fanatical religious leader (Jason Isaacs), a renegade Sheriff (Ed Harris), and a former prostitute (January Jones) collide in a blood triangle on the rugged plains of the New Mexico Territory. (image via imdb.com)

While Sweetwater aka Sweet Vengeance was one of the standouts at this year’s Sundance Film Festival, described as a mix of Django Unchained and 3:10 to Yuma (and not always kindly I might add), it has now found itself in the wider release wilderness.

In fact it’s going straight to DVD in France on 9 October which speaks to either it’s dubious quality or lack of confidence by its distributors that it will find a sizeable cinematic audience.

While it certainly sounds overblown and a tad melodramatic, isn’t that the way with many vengeance tales?

They are by their very nature over the top endeavours.

The trick for any filmmaker is to harness that and still emerge with a worthwhile drama intact.

Whatever the quality of the movie, and it may take a while to determine that given its hit-and-miss release schedule, one thing’s for sure – the poster’s is an absolute kicker and totally unmissable.

After premiering at the Sundance Film Festival in January 2013, Sweetwater is still waiting for a USA release date.

SNAPSHOT
It’s been over 300 years since the Salem witch trials. Zoe (Taissa Farmiga) is shattered to discover she possesses a strange genetic affliction tracing back to the dark days of Salem. She is then whisked away to Miss Robichaux’s Academy for Exceptional Young Ladies, a mysterious school in New Orleans devoted to safeguarding the few remaining descendants who share this unique bloodline, there to teach protection to the young. Those who remain are almost extinct and in danger again. The long-absent Supreme, Fiona (Jessica Lange) arrives to also protect the coven and their secrets. Fiona’s daughter, Cordelia (Sarah Paulson) is a teacher at the school.[5] The themes include witches, witch hunts, incest, minorities, slavery, mothers and daughters, and witchcraft versus voodoo. This season will be set in modern day and the 1830s. (source: wikipedia)

Witches, both good and bad, are quite the flavour of the month right now.

Sleepy Hollow has two covens fighting it out for the future of hunanity, while American Horror Story, which recently delved into the sordid world of a twisted asylum (is there any other kind?) is now tackling witchcraft with series three, Coven.

While the plot sound intriguing, making the series definitely one to watch out for, it’s the posters that have really captured my attention.

The attention to detail, the evocative haunting nature of the images and the way in which they add mystery and yes, creepiness to the show, all combine to give American Horror Story: Coven one of the most distinctively memorable promotional campaigns of the new fall season.

* You can see the rest of the posters at starburstmagazine.com

We know this because Christa Miller tweeted a fabulous pic of the cul de sac gang sitting pretty – but with no sign of wine! Quelle horreur! – in a hot tub on the first day of filming.

And yes naturally I shall scour the land for a hot tub and all the red wine that’s fit for drinking to see in the new season on tbs. 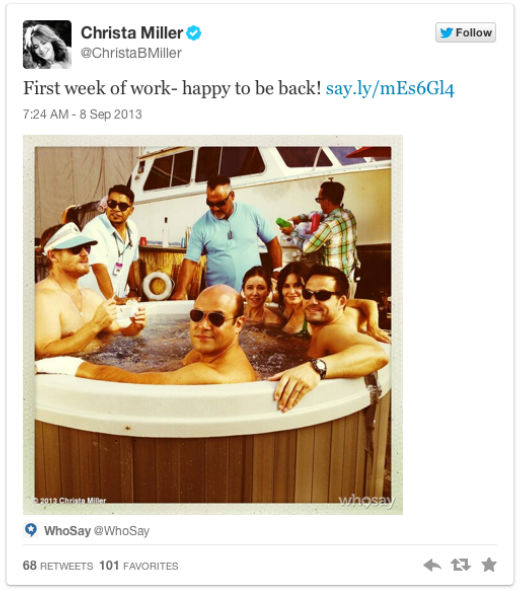