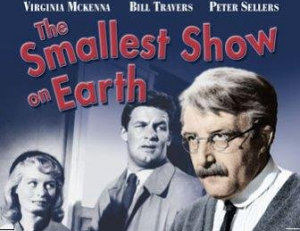 Expectation can be a curious animal.

One one hand it can fill you with joyful anticipation, your mind and pulse racing as you consider how wonderful the show you’re about to watch/the album you’re about to listen to/the book you’re about to read etc will be. The possibilities seem limitless, and especially if you’re positively predisposed to the luminous piece of pop culture goodness about to be consumed, thanks to some artful hype or exuberant word of mouth recommendations, overwhelmingly exciting.

But with the rise can come a less than attractive fall. The other hand, which in the giddy glow of anticipation, seemed to offer only more of the wonder and joy you were expecting, instead slaps you in the face and delivers not so much an enervating pop cultural experience as a slow descent into disappointment, crushing or otherwise. 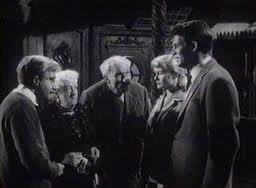 So it was with this movie. The Smallest Show on Earth is widely regarded as a gem of British comedy. Released in 1957 it is reputedly one of those quintessential  movies that the British do so well – a cast of eccentric townspeople, naive interlopers with good intentions and a scenario which will take all of there pluck, ingenuity and verve of the protagonists to bring to bring to a happy conclusion. These movies are usually sweet, charming, exasperating in a good way and a delight to watch.

My partner, who suggested we watch the movie on a quiet Saturday night in, had been told many times by those in the know that The Smallest Show on Earth fit this mould to a tee. So it was with great expectation that we watched as the credits rolled and we settled in for an endearing slice of British idiosyncratic whimsy. How could it not be wonderful we thought? It has Peter Sellers as an old drunken projectionist, Percy Quill,the delightful Virginia McKenna and Bill Travers as sweet young couple, Matt and Jean, and a cast of supporting characters who bring to life a town every bit as eccentric as the rundown cinema, the Bijou (nicknamed the “Flea Pit”by the locals) that the couple inherit when Matt’s great uncle Simon dies. 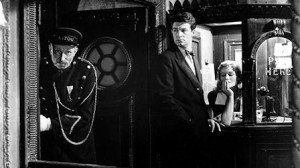 But as the movie went on, I realised that the upward surge of happy anticipation, which for my partner has lasted for nearly three decades (I had only been looking forward to it for about an hour so I was not as affected) was being met head on with the sobering realisation that this movie wasn’t all that funny. It had its moments such as when they pump up the heat in the cinema as the same time as they’re showing a movie set in the desert so patrons will shell out for all manner of cooling refreshments – but it simply wasn’t enough.

In fact, it was so belaboured and stilted that I frankly couldn’t wait for it to end. But lots of people seems to like it. So either there is something terribly wrong with us (quite possible but there are many other British movies of the same idiosyncratic ilk that I have adored), or the world has succumbed to an “Emperor’s New Clothes” mentality with this movie. In other words, no one can admit that it isn’t as good as it should be.

It should have been awesome. A story that featured all manner of eccentric settings, prime among them a dilapidated cinema wedged so snugly between railroad tracks that it shook violently whenever trains went by. A famed director, Basil Dearden, and a cast of big time actors such as the aforementioned Travers, McKenna and Sellers as well as Margaret Rutherford as Mrs Fazackalee and Bernard Miles as Old Tom. And all the opportunity in the old to take a story of adversity – trying to keep there cinema going against the odds when the much more revered cinema, “The Grand”, provided fearsome, deep-pocketed competition. It had everything it needed to be an engaging sweet story…

… and yet we were left wishing the movie would end and more than a little disappointed that a movie that promised so much delivered so very little.

Ah expectation. Thou art a cruel and terrible master indeed.