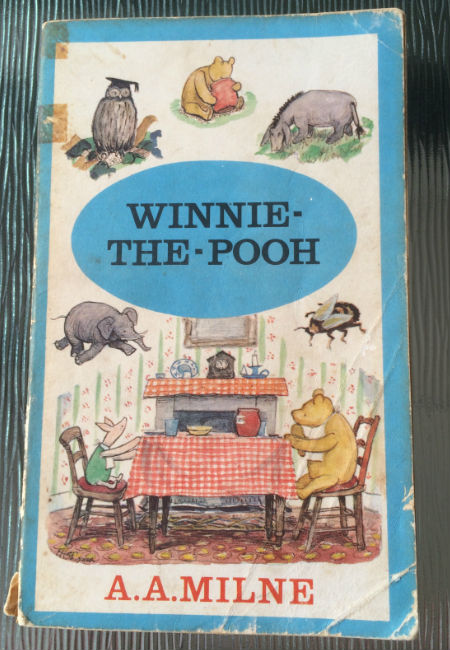 For all his talk of being “a Bear of Very Little Brain, and long words bother me”, Winnie the Pooh was actually the best sort of friend to have around when you were growing up (and honestly long into adulthood too).

After all, apart from an enduring love of honey (and mishaps with bees and blue balloons procuring it), he was the best friend anyone could ask for, knowing the value of having special in your life, and making sure they always stay that way:

“If ever there is tomorrow when we’re not together.. there is something you must always remember. You are braver than you believe, stronger than you seem, and smarter than you think. But the most important thing is, even if we’re apart … I’ll always be with you.“

With that kind of stickability in his favour, it’s no wonder that this most content of bears, who believed breakfast was the highpoint of the day, and appreciated the value of doing nothing, had so many wonderful friends.

Chief among them of course was Christopher Robin, his best friend in the world who was the first person introduced in A. A. Milne’s 1926 book Winnie the Pooh as he dragged Edward the Bear, nicknamed Winnie down the stairs headfirst (it was followed by The House at Pooh Corner in 1928).

It was not a ideal way to travel but Pooh had to concede that it was, “as far as he knows, the only way of coming downstairs, [although] sometimes he feels that there really is another way, if only he could bumping for a moment and think of it.”

Christopher Robin, and Winnie the Pooh, along with his special friends diminutive, sweet-hearted Piglet (“I wonder what Piglet is doing,” thought Pooh. “I wish I were there to be doing it, too.”), thoughtful, melancholic Eeyore (“Eeyore was saying to himself, “This writing business. Pencils and what-not. Over-rated, if you ask me. Silly stuff. Nothing in it.’), Tigger the ebullient extrovert (“… however big Tigger seems to be, remember that he wants as much kindness as Roo.”) and Kanga and Roo and Owl and Rabbit, all of whom lived in the Hundred Acre Wood.

It was a magical place, alive with Heffalumps, streams in which you could play Pooh Sticks, cosy homes,and the chance to just do nothing if the urge should seize you:

“Don’t underestimate the value of Doing Nothing, of just going along, listening to all the things you can’t hear, and not bothering.”

And where, should you ever find yourself stuck in pursuit of a “smackerel of honey”, you could ask a friend to keep you company while you waited to be freed, and they would gladly do so:

”Then would you read a Sustaining Book, such as would help and comfort a Wedged Bear in Great Tightness?”

With a group of friends this special, and a home just as equally splendid, it’s no wonder that I couldn’t wait to spend time with Winnie the Pooh, Piglet, Christopher Robin, Tigger (with whom I most closely identified being rather Tigg’rish myself), pouring over the books I’d inherited from my mother every chance I got.

Escaping into a world where friends would do anything for each other, knowing the true of friendship as well as they did, was a highly attractive prospect for anyone, but even more so, given the delightful way that A. A. Milne wrote about Winnie the Pooh, who was named after a real bear, with such playful, child-like whimsy and wonder.

Winnie the Pooh’s name alone was a joy.

Inspired by Lt. Harry Colebourn, a Canadian soldier who adopted an orphaned black bear cub in 1914 that he spirited off to England during World War 1 and who was subsequently given to London Zoo where A. A. Milne’s son Christopher Robin came across him, Winnie the Pooh (the “Winnie” stands for Winnipeg) was an immediate success, riding high on the rise and rise of the teddy bear, an early 20th century toy that is loved and adored today, no matter how old you are.

The great appeal for me, apart from the sweet bonds of non-judgemental, no-strings-attached friendship that existed between Winnie the Pooh and his quirky pals, and the grand Adventures with a capital “A” that they would go on, was the way it triggered in me a great love of beautifully used words that remains with me to this day.

There was such poetry and whimsical cadence to everything Milne wrote that breakfast became the highlight of the day,  and not simply another meal:

“When you wake up in the morning, Pooh,” said Piglet at last, “what’s the first thing you say to yourself?”

“What’s for breakfast?” said Pooh. “What do you say, Piglet?”

And nothing was ever as bad as it seemed even to Eeyore:

“It’s snowing still,” said Eeyore gloomily.
“So it is.”
“And freezing.”
“Is it?”
“Yes,” said Eeyore. “However,” he said, brightening up a little, “we haven’t had an earthquake lately.”

And the anticipation of something happening was rightly considered to be almost better than the event itself:

“Well,” said Pooh, “what I like best,” and then he had to stop and think. Because although Eating Honey was a very good thing to do, there was a moment just before you began to eat it which was better than when you were, but he didn’t know what it was called.”

A. A. Milne’s great gift, in addition to giving enchanting life, charming character and a timeless quality to his son’s treasured toys – Edward Bear aka Winnie the Pooh and his forever friends Eeyore, Piglet, Kanga, and Tigger now sit happily on display in the main branch of the New York Public Library – was writing these stories with such insight, love of language and appreciation that, with the right words, even the most ordinary of things could become eternally magical and special and always loved.

* Thanks to the supremely talented Maria Popova of Brain Pickings, we can hear A. A. Milne reading one of his exquisitely beautifully written chapters:

“In the summer of 1929, the Dominion Gramophone Company set out to capture prominent British authors reading from their work. In this rare recording, Milne reads the third chapter of his classic, “In Which Pooh and Piglet Go Hunting and Nearly Catch a Woozle,” made all the more delightful by his enchantingly melodic voice.”