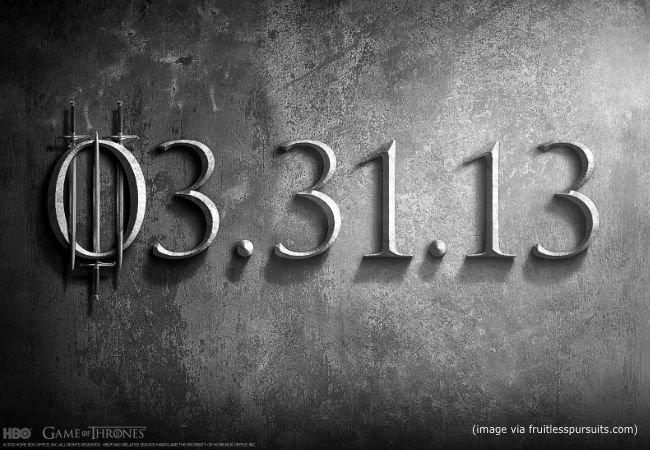 Games of Thrones, back for a third season on 31 March (but then you’d worked that out already courtesy of the poster above right? Right), is the ultimate in epic television.

Everything about the series, drawn from George R. R. Martin’s massive fantasy series, Songs of Fire and Ice, and centred on the power struggle for the Iron Throne of the Seven Kingdoms, is gigantic, gargantuan, huge – the egos of all the players, the lust for power, the battles, the inherent themes which run the gamut from social religion to sexuality and the very nature of power, the love affairs (which often violent, brief and self-serving), the sheer breadth of the storytelling which sprawls across the two continents of Westeros and Essos …

… and the ratings, which have made Games of Thrones that rare beast – a fantasy series that has moved beyond cult status to become a certifiable water cooler hit.

Told with the sort of tight narrative structure, attention to detail and fully flesh out characters that are the hallmarks of almost all of HBO’s high quality productions, it continues to go from strength to strength and season 3 looks set to keep its tradition of epic well-told storytelling alive and kicking …

Along with the wildly impressive trailer above, which presages all manner of titanic, bloody and ruthless struggles to come, HBO has released a series of striking posters that show all 12 of the main players in the series in half shadow, brooding yet steely-eyed with purpose, and ready to leap into action.

* You can see the full range of the posters here.

And here’s a great article detailing how long Games of Thrones showrunners expect to take to tell the epic unfolding tale of the kingdoms of Westeros and Essos.