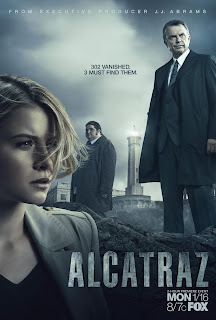 Alcatraz could well be the most perfect conspiracy show to come along in years.
It has, as you’d expect in a show like this, dark overtones of paranoia and mistrust, and yet it remains in full possession of its humanity at the same time. That it does so is largely due to the inherent likability of the two protagonists – Detective Rebecca Madsen (Sarah Jones) and Lost alum, Jorge Garcia as geeky historian and Alcatraz expert, Dr. Diego Soto – both of whom embody an inherent innocence of sorts when pretty much everyone around them, including yes, some of the good guys, operate from suspect, or blatantly evil motives.
A long serving policewoman who lost her partner recently while they were chasing a criminal, she is certainly more jaded than Dr. Soto but has somehow managed to retain a sense of curiosity and a willingness to explore the unexplained. You would think those qualities would be inherent in an upholder of the law but like anyone who’s in a job for any length of time, it is easy to simply stay right within the box and not even open the lid.
Almost from the get-go, Detective Madsen, in her pursuit of the truth, busts the box wide open, and refuses to pay for the damage. But what starts off as just another murder, soon becomes far more than that as she discovers that the fingerprints of the killer belong to an Alcatraz inmate who supposedly died more than thirty years ago. Puzzled by this, and let’s face it, who wouldn’t be, she seeks out anyone who can help unravel the mystery which leads her to Dr Soto, Alcatraz itself and finally Emerson Hauser (Sam Neill) who proves every bit as mysterious as the real story of Alcatraz itself. 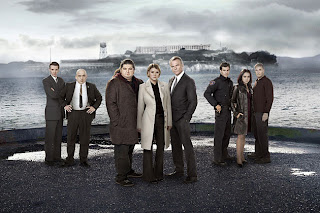 He is slow to reveal information and downright hostile at times. Of course, this doesn’t faze Detective Madsen who regardless of Emerson’s caginess, takes on the case of Jack Sylvane (Jeffrey Pierce) who is the first known inmate to reappear almost 50 years after Alcatraz was supposedly closed and the inmates transferred (in reality they all disappeared and the government covered it up), looking not a day older. He embarks on a murderous spree, arriving from wherever he has been, armed with keys, money and a ticket to get him off Alcatraz where he wakes up.
This is, naturally when the simply murder investigation becomes far more complicated, dark and dangerous. Where has he been for almost 50 years? For that matter, where are all the other inmates and guards and who made them disappear and why? Adding to these, at least in the short term, unanswerable questions is the fact that Emerson knows far more than he is letting on, and was expecting the inmates to reappear. He has been ready for some time to deal with them, which raises suspicions on Detective Madsen’s part; suspicions she puts aside as she races to stop killers who technically no longer exist. What matters to her is having justice served but you can tell she is becoming ever more curious about the layers upon layers that she keeps uncovering.
I think what I liked most about the show, apart from several choice reveals that were dropped into the show from time to time, was the fact that at heart it’s a police procedural within conspiratorial overtones., and that makes it, at least based on the two episodes, far more accessible than shows like Lost which became, ahem, lost, in the maze of their own cleverness. I want this show to be so clever it knocks my socks off, but I also want to feel like I have a handle on what’s happening, both right in front of me and as part of the wider conspiracy.
Based on what I have seen so far, Alcatraz is balancing the two demands with the skill of a highly skilled circus act, and if they can continue to do that, they will craft a show that is as beautifully realised as its premise is tantalising.