My lord it’s been a mainstream movie fest this week!

Usually I avoid a lot of these big tentpole blockbusters, not because I am some sort of twisted movie snob preferring only movies about suffering Romanian peasants during the Depression – although that could be kind of gripping….or not – but generally because they leave you feeling so unfulfilled. I know that not every movie has to leave you imbued with a giddy feel good feeling or overflowing with hope for the future, or pondering deeply about mankind’s possibly imperilled future, but I at least like to leave feeling like I have been taken on a journey with a protagonist who learnt something anything, and who reaches a satisfactory end to their experiences, with some laughs, tears, or again anything on the way that adds some sense of substance to it all.

Those sort of blockbuster movies are rare indeed, and while Thor, starring the chest-a-licious Chris Hemsworth (he of the hot pecs!), and feisty Natalie Portman ( I hope you appreciate that I just completely objectified the man, and left the woman alone; not that it really makes me much of a feminist, just gay!), won’t win any Best Picture Oscars any time soon, it is a lot of fun, detailing the back story elegantly and with minimum expository stodginess, and sending the protagonist, the god of thunder himself, on a reasonably meaningful journey, that results in some lovely moments with the mortals he encounters, and some valuable lessons learnt. 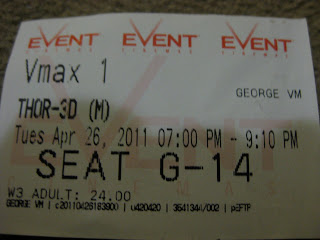 It also looks amazing, from the soaring towers of Asgard, the realm from which Thor is banished, which manages to look medieval and futuristic all at once, to the good old environs of the town in New Mexico, where much of the earth-bound action takes place. It was a feast for the eyes, even when Chris Hemsworth didn’t have his shirt off (but one shirtless shot, people, really?! C’mon haven’t you seen Matthew McCannaughey in action lately!), and one of the few movies to use CGI well to set the scene and create a real sense of time and place.

The only criticism is a somewhat trite and rushed ending, but that is a minor quibble since Thor managed to get right what many of these superhero movies get quite wrong – it had a solid storyline, great characters, drama, ethical challenges, humour, and a wonderful journey for all the principal characters.