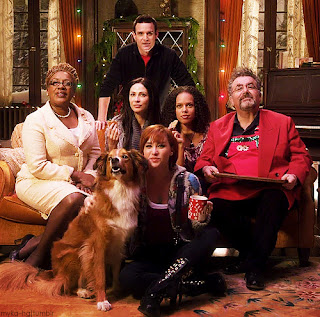 What a fantastically fun episode!

If there’s one thing that a Warehouse 13 episode deliver in spades normally it’s fun. But how much more fun that even those stellar heights was this episode that managed to be heartwarming, comic, and seriously reality-threatening all at once. There’s was just enough schmaltz to warm the cockles of even the most jaded of pop culture-immersed hearts, the spot-on character interaction so finely tuned that you wish you could be a part of their wise-cracking gang, and a storyline that cracked along at a blistering pace. They even threw in a few mythological/historical references just for good measure, and it all added up to a rollicking festive piece of television.

This sublimely wonderful episode kicked off with Peter (Eddie McClintock) and Myka (Joanne Kelly) retrieving Rudolph the Red-nosed Reindeer’s nose from a house in Florida where it was causing massive power surges through the Christmas decorations and transforming a confused family’s dog into a very destructive reindeer. Once the nose was ‘bagged and tagged’ of course everything reverted back to normal and Peter and Myka returned back to the titular warehouse for what they hoped would be a normal Christmas. Or as normal as they can usually manage anyway. 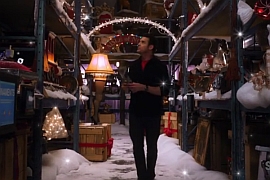 Preferring to avoid family, Pete volunteers to keep the home fires burning and farewells Myka who’s off to see her family, Claudia (Allison Scagliotti) who’s off to Switzerland to see her brother Josh, and even Artie (Saul Rubinek) who is off to Vegas for Christmas with the lovely Dr Vanessa, and alas also his dad. You feel momentarily sorry for Pete, but only momentarily as you soon see him having a ball stacking items in the Christmas aisle (which Artie later calls the aisle of No L… groan).

That is until he falls, and his hand brushes a number of artefacts that fall into the snow covered aisle – which makes perfect sense in a place like Warehouse 13 – and suddenly no one knows who he is. Not the agents in the warehouse office, nor McPherson who should be dead but now runs Warehouse 13, and most distressingly, not even Myka who treats him as a security threat when he turns up in her office. It seems no one remembers who Pete is nor do they remember that they know each other, ands this naturally freaks Pete out completely. 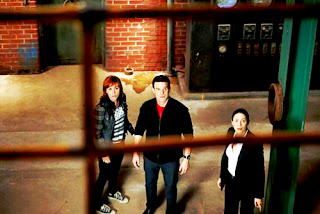 What makes him the natural choice for portraying a man cut adrift, and gives his performance such emotional gravitas is that he is usually the one who acts as if he doesn’t really need anyone. It’s not that he’s callous and indifferent; in fact his relationship with his Warehouse 13 are warm and playful. But he does keep an emotional distance much of the time, and so seeing him desperate and panicked and yet trying to hold it together so he can fix whatever has gone wrong, is almost heart-wrenching. He is raw and vulnerable and desperate to restore things to the way only he remembers they should be.

Of course I won’t spoil things by saying how he manages to restore his timeline but it involves a lot of pleading, cajoling, sweet-talking and sweet talking until everyone is convinced, even when they aren’t sure why, that he is telling the truth. When all the wrongs are righted and things bounce back to the skewed normal of Warehouse 13, Pete finds them all trapped at Leena’s (Genelle Williams) guesthouse by a snowstorm, and he is so ecstatic he even hugs a very unimpressed Mrs Frederic (CCH Pounder) who cautions him to never do that again. Pete isn’t worried – he has his family back and he realises how much these people mean to him. They all think, though he’s gone crazy, and get on with the business of being, well, the family that they are. 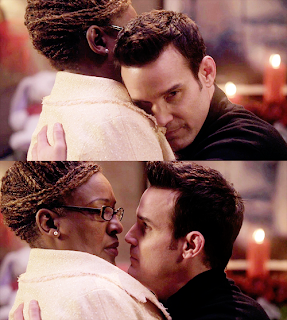 This episode is a joy to watch as I said. It has everything you could ever want in a Warehouse 13 episode, and much more, underlining with a thick permanent marker that no matter what it is you do in the world, even when it’s as weird as the things the Warehouse 13 crew is called on to do, that it’s who you do it with that really makes the difference.